During the gold rush in America, Yosemite Sam attempts to steal other people's gold. An old man named Louie is slouching over by a river to clean the gold he found in a pan. Sam suddenly appears, uses his gun and reputation of "Chillicoot Sam, the roughest, toughest, rootin'-est, shootin'-est claim-jumper that ever jumped a claim — and I'm-a takin' over YOUR CLAIM!" to scare him away, and claims the gold. When he sees how little he has stolen from old Louie, he says "Hardly no reward for a day’s work," even though he did not work for it. Sam later takes the gold to a shop called "Next to Last Chance Saloon" to trade them for money. He places the gold on the counter and orders, "Here Pierre, weigh this up, and keep your thumb off'n them scales!" After the weigh-up, Sam is furious to find out that Pierre can offer only ten dollars for the gold.

While Sam complains about the result ("It's gettin' so a man can't earn a dishonest livin' no more!"), Bugs Bunny wobbles into the shop with a gigantic piece of gold to trade for a couple roots of carrots. When Bugs leaves, Sam asks Pierre the origin of Bugs' finding, and he tells him that Bugs finds gold because he gets a "fonny" ("funny" in mock French accent) feeling when he’s near gold.

With this information, Sam goes to find Bugs. He sees Bugs get the "fonny" feeling, and Bugs digs up the ground, only to find it is a lost collar button. Sam then decides to ask Bugs to be his partner; if Bugs can locate the gold, Sam will dig it up and split it with the rabbit in a 50/50 deal. Bugs stares back at the camera and wiggles his eyebrows with trickery smirk, knowing that Sam cannot be trusted and he will have to play some tricks on him. Choosing to play along, he asks if he really can afford to take Sam up on his offer, and Sam pretends he never had been "Chillicoot Sam" and styles himself "Square-deal Sam" instead. They stroll along together when Bugs randomly starts to act "fonny", which is the sign that indicates he’s found gold. Bugs points out the spot and Sam starts digging for gold and rejects the partnership with Bugs ("Our partnership is dee-solved.") Bugs, realizing he's been double-crossed, spots a cliff and when he tries to tell Sam where he's digging, Sam just orders him to shut up and digs right through, to land in a lake below.

Soon afterwards, Bugs goes downhill, and when Sam shows up, Bugs starts digging, making Sam think Bugs is trying to get the gold for himself, so he grabs the tools and says "That’s what I get for trusting a rabbit." He starts to dig deeper and deeper, but it turns out he is in a dump truck full of rock and soil. The truck driver happens to be Bugs, who drives the truck to a cliff and empties the truck over the edge. But Sam keeps digging and finds himself on the bottom of the soil pile and imagines that he has dug through the globe ("Great horny toadies! I must'a dug clean to Chiny [China]!") and falls into hard ground.

An angry Sam vows to chase Bugs through every state in the Union. When he finally catches up with Bugs, he has another "fonny" moment. Sam tries to resist the gold-digging infatuation but, of course, ends up caving in and starts to dig. This time Bugs is right and he finds tons of gold, but finds out that he is digging at the United States Gold Reserve in Fort Knox, Kentucky ("US Government Private Property: Keep Out," states the sign over the location of the gold). He ends up getting taken away by US soldiers and charged with a felony (Bugs chuckles "So long, Sam! See ya in twenty years!"). Another soldier finds Bugs and asks him what he is doing there; he wittily replies, "Who, me? I’m waiting for a street car." But instead of a car, a ship glides in front of Bugs, and he gets on and leaves the scene. ("In a spot like this, a boat will do," Bugs shrugs.) 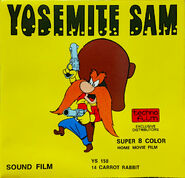 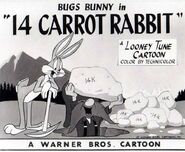 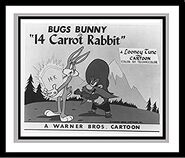