The Brooklyn Ice Palace shuts down after the Ice Frolics packs up to go to another show somewhere else, but during their departure, the Ice Frolics crew forget their star performer, "Playboy" Penguin. As Playboy attempts to catch up with the convoy of trucks, he accidentally falls into Bugs Bunny's hole. At first, Bugs thinks he's having a nightmare, but upon discovering what woke him up, he scolds Playboy for "crashing" into his slumber. Just as Playboy begins to cry, Bugs, now feeling guilty over his actions, apologizes to Playboy and, after finding out he's lost, promises to help him get home. He then looks up Playboy in a book to discover he's a penguin and that his "home" is the South Pole, much to Bugs' shock.

To go down south, Bugs and Playboy hitch a ride on a freight train to New Orleans. Just as Bugs laments on making such a "big fat" promise, Playboy begins to cry again, but Bugs quickly apologizes saying he can't stand to see penguins cry. A hungry vagrant, sharing their boxcar, states, "Me neither; penguins is practically chickens," and decides to make a meal out of Playboy. Bugs stands up for Playboy by pointing out he's bigger than Playboy, so the hobo decides to turn Bugs into rabbit stew, but Bugs coyly trips and kicks the hobo. Just as the hobo runs to him, Bugs opens the door so that the hobo falls off the train, much to Playboy's amusement.

Once in New Orleans, Bugs puts Playboy aboard a ship named Admiral Byrd, which he believes is going to the South Pole. Pleased with his good deed, Bugs decides to order a carrot martini at "La Bouche Cafe" and stay for Mardi Gras, which Bugs pronounces as "Madry Grass". The stay, however, is interrupted when Bugs overhears from a captain and a sailor that the Admiral Byrd is bound for Brooklyn, New York — back to where the journey started. Realizing what he's put Playboy into, Bugs swims out to catch up with the ship, rescuing Playboy from the ship's galley, and swimming ashore to Martinique.

While Bugs strums a guitar and composes a ballad, Playboy is forced to build the boat. As Bugs is playing, Humphrey Bogart, straight out of the Martinique-based film To Have and Have Not, appears and says "Pardon me, but could you help out a fellow American who's down on his luck?" Bugs throws a coin at him and says "Hit the road!"

After ten days at sea, Bugs is beginning to feel hungry, having not taken any food with them. Upon looking at Playboy, Bugs remembers the hobo saying "and penguins is practically chickens" and decides to eat Playboy, but immediately snaps out of his daze and apologizes to Playboy, just as he spots land. The land, however, is the Panama Canal and when the guard at the first lock demands a quarter for passage through, Bugs decides he and Playboy will continue the journey on foot.

As Bugs' and Playboy's route is traced out on a map of South America, they are soon captured by some natives and put into a huge stew pot, at which Bugs blames Playboy for getting them into that mess. Just as a panicked native comes in screaming "El bwana," the natives immediately run away, panic-stricken. As Bugs wonders if the bwana is as dangerous as the natives made it out to be, the strange creature is actually Humphrey Bogart, who then asks Bugs to help him out again. Rather than berate him again, Bugs just gives him a coin for saving his skin and then he and Playboy resume their journey.

Bugs and Playboy's route continues down through South America, with Bugs having to swing through trees, outswim a hungry crocodile, and scale a mountain in the Andes. Upon reaching Cape Horn, it's a boat ride down to the tip of Antarctica, and then a journey on foot across the ice cap. When they finally reach the South Pole (depicted as a candy striped pole), Bugs angrily tells Playboy that he's done his good deed and so now he's going back home himself. Playboy then begins to cry again, his tears turning into ice cubes from the cold. His conscience nagging at him again, Bugs feels guilty and asks Playboy what's wrong now. Playboy then takes out a flier from his hat, which tells Bugs that he was born in Hoboken, where the Ice Frolics' main headquarters is, much to Bugs' shock.

Just as Bugs is about to lose his mind over having to take Playboy all the way back, Humphrey Bogart appears again and starts to ask for Bugs' help. Not wanting to go through what he'd been through with Playboy again, Bugs asks Humphrey Bogart to help him instead. With that, he thrusts Playboy into Humphrey Bogart's hands and runs off, cackling maniacally into the distance.

"8 Ball Bunny" is the second appearance of Playboy; his first appearance was in 1949's "Frigid Hare". The Bogart voice was performed by impressionist Dave Barry (no relation, of course, to the humor columnist).

While the film is introduced by the Looney Tunes music, "The Merry-Go-Round Broke Down", the opening card indicates a Merrie Melodies Blue Ribbon release with the 1959–1964 red Color Rings, as does the end card, replacing the original green opening and ending sequences.

On ABC's The Bugs Bunny and Tweety Show, the part where Bugs and Playboy are captured by South American natives is edited to remove the part where one of the natives runs to warn the group of "bwana" Humphrey Bogart coming and the group scattering.[2] The scene was replaced with a frozen shot of Bogart's feet while the sound of the group muttering and fleeing was heard. 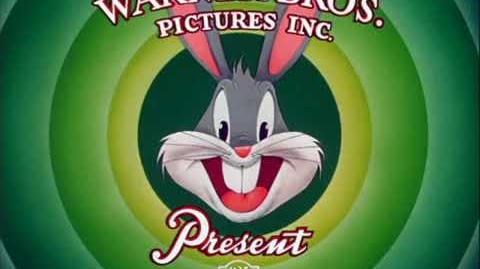