Looney Tunes Wiki
Register
Don't have an account?
Sign In
Advertisement
in: Pages needing citations, Locations, Looney Tunes: Back in Action,
and 8 more

"We were little madcaps along the beach and we did what we enjoyed doing and could get dirty and could eat hot dogs and so on. Since we had to search out our own entertainment, we devised our own fairy stories. If you wanted a bow and arrow you got a stick. If you wanted to conduct an orchestra you got a stick. If you wanted a duel you used a stick. You couldn't go and buy one; that's where the terms acme came from. Whenever we played a game where we had a grocery store or something we called it 'ACME.' Why? Because in the yellow pages if you looked, say, under drugstores, you'd find the first one would be ACME Drugs. Why? Because "A.C." was about as high as you could go; it means the best; the superlative." 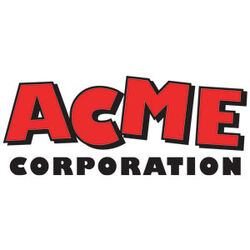 ACME is a fictional corporation that features prominently in the Road Runner/Wile E. Coyote cartoons as a running gag featuring outlandish products that Wile E. misuses in complicated contraptions fail catastrophically. The name is also used in many other cartoons, films, and TV series, besides the Road Runner cartoons. The word acme is derived from Greek meaning the peak, zenith, or prime.

The name "Acme" became popular for businesses by the 1920s, when alphabetized business telephone directories such as the Yellow Pages began to be widespread and businesses wanted their name to be at the top of the list. There were a flood of businesses named "Acme" (some of these still survive). For example, early Sears catalogs contained a number of products with the "Acme" trademark, including anvils, which are frequently used in Warner Bros. cartoons, particularly in Road Runner and Wile E. Coyote cartoons.

The company is never clearly defined in Road Runner cartoons, but appears to be a conglomerate which produces every product type imaginable, no matter how elaborate or extravagant. In the Road Runner cartoon "Beep, Beep", it was referred to as "Acme Rocket-Powered Products, Inc." based in Fairfield, New Jersey. Many of its products appear to be produced specifically for Wile E. Coyote, for example, the ACME Giant Rubber Band, subtitled "For Tripping Road Runners."

Sometimes, ACME can also send living creatures through the mail, though that isn't done very often. Two examples of this are the ACME Wild-Cat, which are used on Elmer Fudd and Sam Sheepdog (which doesn't maul its intended victim, possibly due to the former having a gun and the latter being a big dog); and ACME Bumblebees in one-fifth bottles (which sting Wile E. Coyote). The Wild Cat is used in the shorts "Don't Give Up the Sheep" and "A Mutt in a Rut", while the bees are used in the short "Zoom and Bored".

While their products leave much to be desired, ACME delivery service is second to none; Wile E. can merely drop an order into a mailbox (or enter an order on a website, as in the Looney Tunes Back in Action movie), and have the product in his hands within seconds.

In one of the later cartoons, it is revealed that ACME is "A Wholly-Owned Subsidiary Of Roadrunner Corporation," suggesting that The Road-Runner possibly controlled the nature of the products that Wile E. ordered so that they would backfire.

The name "Acme" is used as a fake corporate name in a huge number of cartoons, comics, television shows (as early as an I Love Lucy episode), and films (as early as Buster Keaton's 1920 silent film Neighbors and Harold Lloyd's 1922 film Grandma's Boy).

Examples which specifically reference the Wile E. Coyote meme include: