A Day at the Zoo

A Day at the Zoo

A Day at the Zoo is a 1939 Merrie Melodies short directed by Tex Avery.

A series of gags, usually based on outrageous stereotypes and plays on words, and topical references, is presented as a narrator (Gil Warren) describes a "tour" of the "Kalama Zoo" where the animals have nonsensical names, display anthropomorphic behavior, or illustrate punny gags. 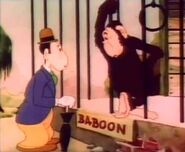 Original titles for "A Day at the Zoo" along with various other original titles
Community content is available under CC-BY-SA unless otherwise noted.
Advertisement