A Ham in a Role

A Ham in a Role

Mac and Tosh
The Dog

A Ham in a Role is a 1949 Looney Tunes short planned by Arthur Davis and finished by Robert McKimson.

A dog is tired of appearing in cartoons and goes home to study the works of Shakespeare. Upon arriving back home, the dog finds that his home has been invaded by gophers. Unfazed, the dog then begins reading Hamlet. Upon discovering the gophers sleeping in the book, he throws the book out the window.

The Goofy Gophers then get their revenge on the dog by literally interpreting lines from Shakespeare works, including "lending him ears," tormenting him with flames (to his foot), dousing him with "the joy of life" (by dumping a tub of water on the dog), dumping Limburger cheese as the dog utters the "that which we call a rose" line while holding a rose, imitating the exhumed Yorick in a dance (making the dog appear like a Shakespearean coward), using magnets on the floor and ceiling to toss the dog around the room (in armor), with the coup de grâce coming about when the Gophers use a horse to kick the dog out of his house and back to the studio, where the dog laments that "parting is such sweet sorrow," returning to the studio where he began as the song "You Ought to Be in Pictures" plays in the background. The dog recites, "To be...or not to be..." only to be splatted by the pie in the face again. 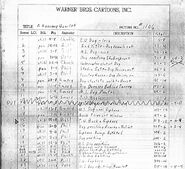 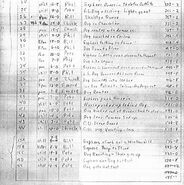 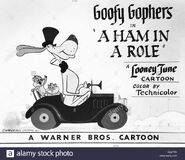