A Hare Grows in Manhattan is a 1947 Merrie Melodies short directed by I. Freleng.

Unlike many cases where "hare" is a pun on "hair", the title here is a play on a then-recent book, A Tree Grows in Brooklyn, which figures into the climax of the cartoon (however, it does also contain a punning reference to what hair does: grow).

The cartoon begins with the voice of an apparent Hollywood gossip queen named "Lola Beverly" (patterned after famous newspaper and radio columnist Louella Parsons, infrequently known as "Lolly"; note the next sentence) talking behind the camera as it pans across Beverly Hills, settling in on Bugs Bunny's "mansion", which is actually a rabbit hole with fancy trimmings such as columns and a swimming pool. Lola (or "Lolly" as Bugs calls her familiarly, also effecting her hoity-toity manner of speech) coaxes a biographical story out of Bugs, and he talks about growing up on the Lower East Si of Manhattan (presumably accounting for his accent). He is seen tap-dancing down the streets of the Big Apple and singing "The Daughter of Rosie O'Grady" (a song written in 1917 by Walter Donalds and Monty C. Brice).

Most of the story involves Bugs being repeatedly assaulted by a "street gang" consisting of a pack of stray dogs, led by a tough-talking but none-too-bright bulldog who wears a bowler hat and turtleneck sweater (and also resembles Hector, a bulldog which appeared in a number of Sylvester/Tweety cartoons starting in 1948). There are at least two references to real-life New York City landmarks. In one scene, Bugs smacks the bulldog with pieces of pie purchased at the Automat; in another, he tries to escape through the Stork Club (spelled here "Stork Klub," wherein real storks are the patrons). Bugs then tries to hide in a rooftop billboard for "Egyptian" cigarettes, a play on animated billboards in Times Square. At one point, the bulldog finds himself hanging by one "hand" from a clothesline. Bugs, on an adjacent line, plays Tweety's time-honored "this little piddy" game (even talking in something close to Tweety's voice), peeling the clumsy canine's "piddies" from the line one by one. When he "runs out of piddies" and he dog falls, Bugs reverts to his normal voice, and his famous aside to the audience, "Gosh, ain't I a stinker?"

Bugs thinks he has dispatched the dogs, saying "that's '-30-' for today!" He goes back to his tap-dancing and singing, and suddenly finds himself in a blind alley next to a newsstand. The gang of dogs reappears and marches in on Bugs menacingly. Bugs grabs a book and threatens to hit them with it in his "last stand". The dogs' eyes open wide when they see the book, and they turn around and race to, and across, the Brooklyn Bridge. The puzzled Bugs looks at the book and sees that it is the then-recent and famous novel, A Tree Grows in Brooklyn, which was obviously the inspiration for the cartoon's title.

Bugs says to himself and the audience, in a rare quiet and reflective moment, "Ya know, maybe I oughta read dis t'ing!" As the underscore reprises an instrumental bar of "Rosie O'Grady", Bugs is seen walking away from the camera and toward the city's skyscrapers, while reading the book and humming along until iris out.

The short was originally based on a short autobiographical piece of the same name that was published in the December issue of Coronet magazine in 1945. In the autobiography, Bugs recounts his rise to fame and only briefly mentions his days on the streets of Manhattan which he describes as "simple and carefree". He would spend his days throwing rocks at his pals, stealing carrots from local pushcarts, and dealing with thugs using his "rabbit punch" technique.

The story continues in which Bugs reveals that his name was given to him by his family for his funny antics. In time he would land a job at a place called the Palace where he would serve as the rabbit in the hat of the magician the Great Presto. Eventually he would leave for Hollywood, much to the sadness of his parents, to become a star. Which he boasted that he "arrived just in time to save the movies from the hams who was overrunning it".

When this cartoon aired on The WB network, the following scenes were edited: 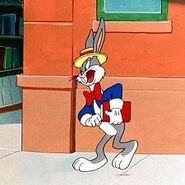 A Hare Grows In Manhattan at SuperCartoons.net

A Hare Grows In Manhattan at B99.TV

Retrieved from "https://looneytunes.fandom.com/wiki/A_Hare_Grows_in_Manhattan?oldid=202504"
Community content is available under CC-BY-SA unless otherwise noted.