A Hick a Slick and a Chick

A Hick a Slick and a Chick

A Hick a Slick and a Chick is a 1948 Merrie Melodies short directed by Arthur Davis.

Elmo (the Hick) gets all slicked up and arrives at his girl's house in the city by hubcap, all while singing "Rural Rhythm". He catches Blackie (the Slick) kissing Daisy Lou (the Chick), and he starts a competition with Blackie for Daisy's affection.

Elmo brings in a handful of flowers; Blackie brings in a florist's shop full of flowers (causing Elmo's flowers to de-age back into seeds). Elmo plays the jaw harp; Blackie plays a piano concerto. Blackie then punches Elmo across the street. Blackie brings Daisy a mink coat, but Elmo says he'll bring back ermine. Elmo accidentally gets drunk in a bottle of champagne, and spots a cat called Herman. Elmo remains unaware of the danger that he is in close proximity with the cat, until a splash of milk from Herman's milk bowl sobers the mouse up.

Both the cat and mouse fight, and Elmo knocks him out. Elmo presents Daisy with an ermine coat, whom the latter then leaves Blackie for Elmo. Blackie wonders where he got ermine, but Herman punches him and says, "Don't get nosy, Junior!" in a Jimmy Durante voice, and turns to show the coat-shaped cutout on his rear end, implying that Elmo has ripped out part Herman's fur to make the ermine coat off-screen. The cartoon irises out in a coat shape as the cat leaves the scene. 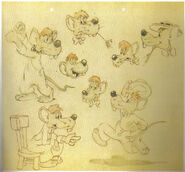