A Horse Fly Fleas, reissued as A Horsefly Fleas, is a 1947 Looney Tunes short directed by Robert McKimson.

While looking for a home, A. Flea befriends a homeless horsefly, a fly that looks like a horse, who had just recently lost his home, a milkwagon horse which was replaced by "autos". They both find a nice dog, relaxing in front of a fireplace, and they build a little cabin in his fur.

However, Indian fleas already inhabit the dog, so they attack the invaders. The dog sees some of the antics and is bewildered. He shakes a can of flea powder on his rump, but the fleas see it as snow, and sled and ski their way around. The dog gyrates, then smacks his back a few times with a fireplace poker. He watches as the flea and horsefly are chased across the bridge of his nose by the marauders. A straggler walks up to the dog's eye and chops it with a tomahawk. The Indians catch the flea and fly, tie them to one of the dog's hairs, and light a fire under them to burn them at the stake. The dog notices the smoke coming from his backside, then yelps in pain. He dashes outside to douse the fire in the fountain and watches as all the fleas flee in canoes.

Later, the dog is snoozing in front of the fireplace again, when a traveling flea circus finds him. As they settle into his hind quarters, the flea, the horsefly, and the Indian fleas return and crawl up his front leg.

One circus tent is labeled "Wild West Show", and the flea rides the horsefly inside of it, followed by the Indians. The dog grabs a magnifying glass and some cotton candy and sits down to watch the show. 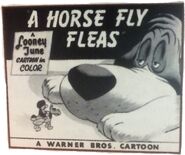 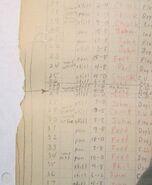