A Hound for Trouble

A Hound for Trouble

A Hound for Trouble is a 1951 Merrie Melodies short directed by Chuck Jones.

Kicked off the boat in Italy, Charlie forces himself upon a pizzeria owner. Donning his best Italian accent and garb, Charlie sets to work as a waiter, astonishing and horrifying the customers with his barefoot grape-stomping and his musical rendition of "Atsa Matta for You?" The pizzeria owner tricks Charlie into holding the Leaning Tower of Pisa, leaving Charlie stranded at the side of the tower, where the dog's calls for help fall on deaf ears. 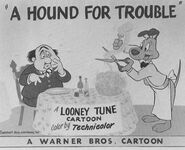 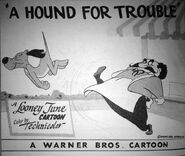 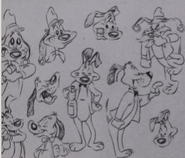