A Message to Gracias is a 1964 Looney Tunes short directed by Robert McKimson.

The title and plot are a reference to the essay Message to Garcia.

Mexican Revolutionary mice make numerous attempts to deliver a message to General Gracias, but fail when every messenger is caught and eaten by Sylvester. Desperate, El Supremo then resorts to Speedy Gonzales to deliver the message.

After Speedy runs past him (leaving him on fire in the process), Sylvester resorts to several plans to stop Speedy from delivering the message:

With Sylvester dealt with, Speedy reaches General Gracias to deliver the message. Upon reading it however, it turns out to be a poem saying "Happy Birthday", much to Speedy's disgust because he had gone through all the trouble he had with Sylvester for such a relatively trivial message ("This is A important message?"). Turning around, Speedy sees El Supremo (who had apparently used Speedy as a decoy to distract Sylvester while he safely got to Gracia's HQ) with a birthday cake for his amigo. Racing up to Sylvester, Speedy asks him they're thinking the same thing. When Sylvester agrees, Speedy promptly cuts the "pussy gato" out of his bonds, who then chases after El Supremo and General Gracias while imitating Speedy's catchphrase. As Sylvester chases the two mice down the road and over the horizon, Speedy comments "Well whataya know, it looks like the generals and the pussy gato is going to have lunch together. Sort of gets ya right here (in the heart), no?" 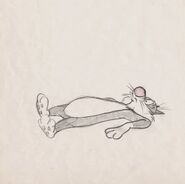 Retrieved from "https://looneytunes.fandom.com/wiki/A_Message_to_Gracias?oldid=197623"
Community content is available under CC-BY-SA unless otherwise noted.