A Mouse Divided is a 1953 Merrie Melodies short directed by Friz Freleng.

The Drunk Stork is delivering a baby to the nearest available home. Sylvester's wife, wanting a baby despite his objections, graciously receives the package. Sylvester is nonetheless excited- until he learns the baby is a mouse, at which point he tries to eat it. His wife quickly stops him, and when she goes out, and is not seen again afterwards, he tries again, only to stop after the mouse calls him "Daddy".

Sylvester's attitude changes entirely, and he takes him for a walk. Unfortunately, he is quickly forced to bring him back into the house as a battalion of cats pursue Sylvester. Several cats try to steal the mouse, using babysitter, salesman, and Santa disguises, cutting holes in the floor, and using a battering ram, only to be foiled by Sylvester, who is now on the winning end of traps to which he usually falls victim.

The stork returns, still drunk, to retrieve the mouse and deliver it to its proper home. The mouse sees a piece of cheese dangling from a hook in the fireplace, but Sylvester stops the baby, thinking "those darn cats" are making another attempt to kidnap the mouse. Sylvester grabs the cheese and gets hoisted up the chimney. The still-drunk stork mistakes Sylvester for the baby, "Boy! (hiccup) Did that mouse grow!" and then delivers Sylvester to the mouse couple.

Later, two mouse parents walk Sylvester, dressed as a baby, with the wife telling her husband, "Nothing like this ever happened on my side of the family!" and he stares in bewilderment. 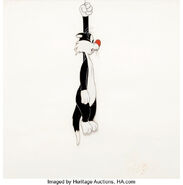 Sylvester is sleeping lazily on the floor