A Mutt in a Rut

A Mutt in a Rut

A Mutt in a Rut is a 1959 Looney Tunes short directed by Robert McKimson.

Elmer is leaving for a day of work. He and his dog part ways as the dog longingly watches him leave for the day. After he turns on the television, Rover sees an odd show about a man discussing what owners tend to do to their old dogs, or dogs they just don't want anymore. They take them out, claiming to go hunting, then shoot the dog, much to Rover's shock. After he looks over to a picture of Elmer, Rover starts to think that Elmer is probably tricking him so that he'll just wind up shooting him when he's too old, much to his anger. So when Elmer gets home, Rover begins to behave in a hostile manner. Such as laying on the bed, and throwing his slippers in the trash.

Elmer throws Rover out of the house, refusing to let him back in until he stops misbehaving. Elmer then sits down with a paper to see that Hunting Season has begun, so Elmer wonders if maybe Rover just wants to spend time with him due to not doing anything with Elmer for a while and he decided to go out hunting. He gets up to grab his gun, unaware that Rover is watching him. He happens to overhear what Elmer says and worries he'll be shooting him on this hunting trip, so he starts to make plans on how to rid of Elmer first...

While out, Rover makes multiple attempts on Elmer's life after Elmer tries to get him to get in front of him so that he can chase out some wild animals for him to attempt hunting. First he tries a simple method involving shooting Elmer, but his aiming makes him shoot a wild grizzly bear in the cave Elmer happened to be standing near. Elmer sees the bear and is very happy that Rover saved him, but when he goes to see him Rover runs off to attempt a second kill. Which consists of a wild cat in a box. Elmer decides to sit down and rest, but when Rover releases the violent, wild cat, it attacks him instead of Elmer.

Elmer is very happy that Rover has been helping to keep him safe all day, but Rover refuses to believe he really cares about him and tries a third, and final time to rid of his "neglectful owner". So he sets up a bomb, but notices it wont go off. Rover gets up to check on it and sees that the line connecting the explosive to the trigger box has disconnected. So Rover puts them together, causing the bomb to go off. Elmer once again thanks Rover for being a good dog, causing Rover to finally realize and admit he was wrong all this about his owner as Elmer showers him with praises.

A very happy Elmer brings Rover back home and sits him down on the chair to rest his now broken leg. He turns on the television and goes to get him a drink. The man on television continues to say how bad owners are, much to his aggravation. As Elmer returns, he notices Rover is missing and sees him attacking the man on television! 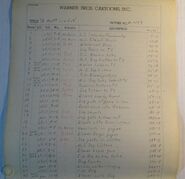 A mutt in a rutt CBS censorship