A Pest in the House

A Pest in the House

A Pest in the House is a 1947 Merrie Melodies short directed by Chuck Jones.

The title is an appropriate play on "a guest in the house."

A labor shortage "became so bad" that employers are compelled to hire "anybody or anything". Daffy is a hotel bellboy and Elmer is the manager in the Gland Hotel. A tired man demands peace and quiet, and threatens violence against Elmer if disturbed. "Just one more thing. I'm a tired man. I gotta have my sleep, plenty of it. So see to it that I get lots of peace and quiet. Because if I'm disturbed at any time, I'm gonna bust you right in the nose!" Daffy, Jerry Colonna-like, remarks: "Likable chap, isn't he!" Daffy does many stunts that keep the man awake, complete with escorting him to room 666. Every time he is awakened again, the increasingly-irritated man trudges to Elmer's station, to the tune of "Pop Goes the Weasel", and at the moment where the song would say "pop", he busts Elmer in the face.

When Daffy says it is too cold, he decides to fix the radiator. Elmer, fearing getting beat up again, chases after Daffy. Daffy makes the heat vibrate to the room. Elmer, fearing that the room might Explode along with the man, hears whistling and covers it with several pillows. Daffy, thinking that Elmer is blowing whistles and trying to kill the man, rants to him by saying "So, a fine kettle of fish! Here I work myself down to the skin and bones trying to keep this guy asleep and what do you do? Blow whistles! Just when I got things so quiet you can hear a pin drop, you bust in here and bust out with a whistle and you snafu the whole works! How in the name of all things reasonable do you expect a guy to get his slumber when a goof like you goes around making noises like a one-man 4th of July celebration?! He needs peace and quiet! It's positively outrageous!" Elmer nervously tries to shush Daffy but Daffy's screaming obviously wakes the now enraged man who shows red swirls in his eyes and grits his teeth, so Elmer hurries downstairs and he and Daffy switch places in an effort to fool the man, but Elmer gets beat up anyway. Daffy, again like Jerry Colonna says, "Noisy little character, isn't he!" 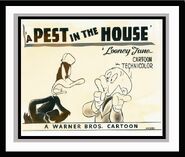 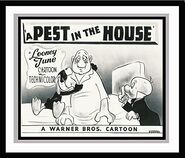