A Sheep in the Deep

A Sheep in the Deep

A Sheep in the Deep is a 1962 Merrie Melodies short directed by Chuck Jones and Maurice Noble.

Sam wakes up at dawn and takes a leisurely stroll to work as Ralph sleeps in. Just as Sam reaches the punch clock and lifts his hair to read the time, Ralph's alarm clock goes off, triggering the conveyor system that he uses to get to work. A claw lifts his blanket, his bed tilts, dropping him into a trap door where he falls into the shower, after a second in the shower a spring below him engages, sending him into a towel and onto a roller skate. As he rides the roller skate down its rail and dries off with the towel, he is fed a slice of toast and coffee. Finally, he grabs his lunch from a hook and rides the roller skate out his front door, down the path, and punches into work before Sam. As always, the two merrily greet each other.

1. Ralph begins with the straightforward approach of sneaking into the field and snatching a sheep. As he walks back, Sam drops a banana peel on which Ralph slips. Instead of falling immediately, Ralph slides around on the banana peel, and on his way back Sam snags the stolen sheep with a lasso. As Ralph continues to slide forward, he begins to say "Ooh, I'd like to..." only to hit a tree face-first.

2. This time Ralph digs a hole under Sam and out the side of the cliff face, and decides to try to snatch a sheep with a lasso in the same way Sam did in Ralph's last attempt. This is successful, but while Ralph is pulling the sheep up Sam leans over the edge and into Ralph's hole, where he glares at Ralph intimidatingly. Ralph innocently lowers the sheep down, but Sam grabs Ralph by the neck and hits him on the head, propelling him into a tree trunk. As Ralph climbs out of the tree trunk, he resembles a stack of pancakes.

3. Ralph's next plan is to tunnel under Sam, cut out a circle of earth around Sam with a saw, and jack that circle high into the air with a jack. Successful, Ralph ties a dinner napkin around his neck and prepares to steal a sheep. However, as he's doing this, Sam pulls out a corkscrew and removes the piece of earth that the jack is supporting, sending the entire chunk of earth crashing onto Ralph.

4. In Ralph's fourth attempt, he ties himself to a bunch of helium balloons and floats over Sam. Sam calmly pours a box of BB pellets into his mouth and shoots at Ralph's balloons with a blow gun. Ralph is left grasping on to a single balloon, but the knot on the balloon slips and Ralph is projected into Sam. Sam grabs Ralph by the neck and prepares to drop him off the cliff.

However, before that can happen, the punch clock whistle blows and Sam and Ralph head off for lunch. They enjoy their sandwiches and Sam shares his coffee with Ralph, then they have a smoke break.

They both walk back to the cliff, and as soon as the whistle blows to signal the end of lunch, Sam grabs Ralph by the neck and finally drops him.

5. Ralph's next plan is to build a large slide behind Sam and drop a cannonball down the slide. Sam casually points a large spring at the end of the slide, sending the cannonball back up the slide and into Ralph's dropped jaw. Ralph angrily walks away as the cannonball inside his tail weighs him down.

6. Ralph then attempts to use a record titled "Music to put sheep dogs to sleep by" to put Sam to sleep. This appears to be successful, and Ralph tests to make sure that Sam really is asleep. After walking off, stealing a sheep and preparing to eat it, the sheep turns out to be Sam in disguise. However, the two of them continue to remove disguises.

Finally, Ralph grabs the sheep by the neck, and the sheep turns out to be a stick of dynamite.

However, Ralph is saved by the bell when the punch clock whistles. Sam walks in off screen and extinguishes the stick of dynamite, saying "It's too close to quittin' time Ralph, let's pick it up there in the morning." The two amicably wish each other good night. 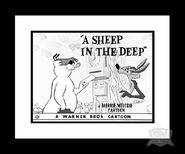 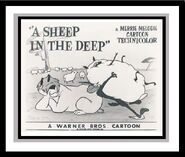 A Sheep In The Deap Road Runner Show Censorship