A Tale of Two Kitties

A Tale of Two Kitties

A Tale of Two Kitties is a 1942 Merrie Melodies short directed by Bob Clampett.

The title is an obvious pun on the Charles Dickens classic A Tale of Two Cities, but there is no other connection between the two "Tales".

Catstello hesitates to catch and eat Tweety so that he and Babbit could eat, largely because Catstello is afraid of heights, as well as getting attacked by birds, but Babbit convinces him to do so, since Tweety is only "a tiny little bird", though unknown to them, Tweety is dangerous.

Catstello gets height-phobic and falls off the ladder. When the straightforward approach fails, Babbit then subjects Catstello into doing the following attempts to catch Tweety for food, all in vain:

Tweety tells the air-raid warden "Lights out," and passes by both Babbit and Catstello. Babbit and Catstello see Tweety on the ground. "Hey, now's our chance. Come on!" They creep up on him. They approach him, eyes bulging, claws drawn, big teeth exposed. Tweety turns over and yells in a very loud and un-Tweety-like voice, to "TURN OUT THOSE LIGHTS!" The cats' eyes, the street light, and the moon all blink out.

When this short aired on The WB, Catstello's line "If the Hays Office would only let me, I'd give 'im the bird alright!" after Babbit says, "Gimme the bird! Gimme the bird!" was cut, as "the bird" Catstello is referring to is a slang term for showing someone the middle finger, which is considered a rude gesture in most cultures and a taboo by the Hays Office.[2] Cartoon Network, Boomerang, TBS and TNT, however, left this scene uncut. 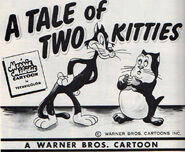 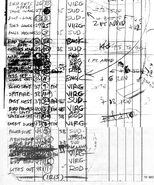 Pencil sketch of the original title