A Taste of Catnip

A Taste of Catnip

A Taste of Catnip is a 1966 Merrie Melodies short directed by Robert McKimson.

The title is a play on the 1965 song "A Taste of Honey" from the earlier play and film of the same name.

At the Guadalajara Medical Centre, psychiatrist Dr. Manuel Jose Olvera Sebastian Rudolfo Ortiz Pancho Jimenez Perez III (Mexico's finest) describes an encounter one year ago with Daffy Duck. Daffy tells Perez that he has been exhibiting progressively more extreme cat-like desires. It starts off with an encounter with Speedy while Daffy was reading a newspaper in the park. Daffy develops symptoms of wanting to eat Speedy in a variety of ways, trying to nab Speedy from other cats, and being scared of dogs such as Butch. Daffy tries to take singing lessons to take himself off his addiction, which fails due to his corny singing. After drinking milk from a bowl, Daffy comes to his senses and immediately heads to therapy.

Perez discovers through a blood test that Daffy has lethal amounts of catnip in his blood, and he must discover the source. Daffy discovers that right across the street is the Continental Catnip Corp. of Chihuahua. He decides to destroy it with a bomb, ridding him of his cat-like desires but also arousing the wrath of neighborhood cats, including Sylvester. Perez receives a phone call about Daffy's success, and his next patient, Speedy Gonzales, enters; he exhibits duck-like desires. Moaning, Perez claims, "I should have listened to mi padre. He wanted me to be a bandido." 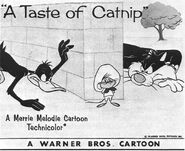