Abraham "Abe" Levitow (2 July 1922 - 8 May 1975) was an American animator. He worked at Warner Bros. Cartoons, United Productions of America, and Metro-Goldwyn-Mayer (MGM).

Levitow was born in Los Angeles, California. He began working as an in-betweener at Warner Brothers Studios in 1940. Levitow briefly left Warner Brothers when he was drafted during World War II, returning in 1945. He first received animation credit in 1953 while working under the direction of Chuck Jones. He worked steadily for Jones over the remainder of the 1950s, and directed several cartoons for release in 1959, including the Pepé Le Pew cartoon Really Scent. While working under Jones, he made characters' joints more angular than most other animators. Those characters with fur (Wile E. Coyote, for example) looked especially shaggy in Levitow's scenes.

In 1961, he moved to UPA and directed a series of Dick Tracy cartoons. Then in 1962, he directed the first feature-length animated television special, Mr. Magoo's Christmas Carol. 1962 also saw the release of his theatrical feature Gay Purr-ee, with the voices of Robert Goulet, Judy Garland, and others. By 1965, he was working with Jones at MGM as an animator and a director in the Tom and Jerry series. He co-directed the feature film The Phantom Tollbooth with Chuck Jones at MGM. In addition, he worked with UPA on more Mr. Magoo cartoons, including The Famous Adventures of Mr. Magoo. He animated on the Chuck Jones-produced A Christmas Carol, directed by Richard Williams at Williams' London studio in 1971. 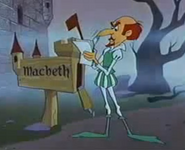