Adolf Hitler was the leader of Germany from 1933 to 1945 and one of modern history's most hated and notorious figures. Hitler first was appointed chancellor in 1933, but he began to change all of the laws of the Weimar Republican Germany, including free speech and voting, and soon became known to the Holocaust survivors and the average German people as a totalitarian dictator.

Adolf Hitler was born in Austria in 1889 and moved to Germany in 1913. He attempted to overthrow the government in the 1920s and was imprisoned. During the time in prison, he wrote a memoir Mein Kampf ("My Struggle"). He was released one year later, and began to gain support by promoting anti-semitism and made the Nazi political party at the time more notable.

The Nazi political party grew in the 1920s and appointed Adolf Hitler as chancellor in 1933. Hitler believed the Jewish population was causing economic problems for Germany because they ran banks and dealt with money. To deal with them, Hitler opened labor camps in the empire to kidnap Jewish people in the German Empire and enslave them to death. Those who refused to work for Hitler were immediately killed upon arrival. The people running the camps were brutal and the camps were unsanitary. To prevent escape, Hitler ordered barbed wire to be placed around the fences to poke or hurt anyone who tried to escape. In addition, if that failed, people could risk getting shot and killed by the guards.

Hitler ordered the German army to invade Poland in 1939, which in the process started World War II. Hitler also partnered with other dictators such as Benito Mussolini in Italy and Hirohito in Japan. Hitler's army captured many countries in Europe and enslaved their Jewish populations as well. The United Kingdom entered the war when France was captured in 1940. Shortly after, the Battle of Britain begun, a surprise attack that hit the city of London, killing many innocent tourists and people.

Benito Mussolini was deposed in 1943, and the Axis domination in Europe began to decline. During this time, the United States entered the war with Europe, as their part in World War II with Japan was a separate conflict than Europe's.

Hitler unofficially married his long-time lover Eva Braun one day before his death. The next day, Hitler committed suicide 30 April 1945 after seeing the demise of his utopia. His wife also killed herself that same day. A week after Hitler died, Nazi Germany surrendered and war crimes were charged against many of Hitler's officials and assistants. However, the war only ended in Europe, as the Japanese Empire was not ready to give up quite yet, but they eventually surrendered due to the atomic bombings of Hiroshima and Nagasaki. The war officially ended 2 September 1945.

Character in the Cartoons

Michael E. Birdwell argues that the context of Adolf Hitler's depiction in "Bosko's Picture Show" was due to the background of the Warner brothers, owners of Warner Bros. Harry Warner was a Polish Jew who emigrated to the United States in the 1880s. His brother Jack L. Warner was born in Canada, but raised as an American Jew.[1] Harry was a religious man with strong moral convictions. Harry believed that he could promote the causes of "racial and religious... tolerance and justice" through his films.[1] Jack did not share his brother's religiousness, nor his convictions. He was attempting to distance himself from his family's background and integrate himself into the White Anglo-Saxon Protestant society of California. He also took advantage of the casting couch to seduce women.[1]

During the Great Depression Warner Bros. produced its fair share of escapist films, like most of its contemporaries in the film industry. But also produced films depicting the perceived social ills of the time: Depression-era conditions, "crime, racism, religious intolerance, prostitution, southern chain gangs, drug abuse, and the mistreatment of World War I veterans".[1] The examples include films such as The Public Enemy (1931), I Am a Fugitive from a Chain Gang (1932), and Wild Boys of the Road (1933).[2]

These films were not exclusively released in the United States. By the mid-1930s, an estimated 30-40% of the revenues of the American film industry actually came from foreign distribution of their films. Primarily in the European market. Warner Bros. had managed to secure a strong share of the German market through a distribution deal with the prestigious Universum Film AG. Harry Warner actually considered buying out the German company. In 1932, Harry visited Weimar Republic Germany in order to complete the deal, and took note of the rise of antisemitism in the country. While the Nazi Party had yet to climb to power, the Sturmabteilung (SA) were already a visible part of public life. Harry decided to cancel the deal and leave the country.[1]

In June 1933, Nazi Germany issued its first decree placing "restrictions on the distribution of foreign films in German markets", censoring their subject matter. Restrictions which would become increasingly strict for American films in particular, until September 1940 when the distribution of their films was outright banned.[1] Warner Bros. already suspended its operations in Germany by July, 1934.[1] Harry hoped for a while to create a film to expose the evils of Adolf Hitler and Nazism. But Jack worried that such a film would alienate William Randolph Hearst, and the Production Code Administration would prevent the release of any overtly anti-Nazi film for most of the 1930s. Joseph Breen insisted on it.[1] As a result, Bosko's Picture Show would become the first film to actually target Hitler. And for a while it would remain the only one. Poverty Row studios would soon complete the films Hitler's Reign of Terror (1934) and Are We Civilized? (1934), but both films were denied a wide release because of their content.[1]

During the war, he was used as a symbol for all that the Allies were fighting against and became the main antagonist of countless wartime propaganda cartoons, some of the most famous being of the cartoons now known collectively as Looney Tunes. Unlike Disney, who tended to take a more "mock" documentary of Nazism, the Looney Tunes cartoons were more blatant in their contempt for Hitler and he was a wild, exaggerated yet genuinely reviled character in every short that featured him.

Adolf Hitler has appeared in sixteen Looney Tunes cartoons to date, ten of which as a human. In each of these, he appears in a caricature form and typically faces one of the Looney Tunes characters (the most prominent ones being Bugs Bunny and Daffy Duck).

He also appears in the following Private Snafu cartoons:

Snafu mentions him in:

His name appears in:

"She Was an Acrobat's Daughter"

"Eatin on the Cuff"

Again from "Tin Pan Alley Cats" but with Joseph Stalin 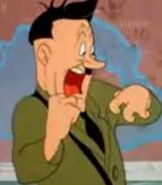 Daffy hits Hitler with the hammer in "Daffy - the Commando"