Adventures of the Road-Runner is an animated film directed by Chuck Jones and co-directed by Maurice Noble and Tom Ray. It was the intended pilot for a television series starring Wile E. Coyote and the Road Runner, but was never picked up; instead it was later released theatrically in its entire featurette form alongside with the full-length Warner Bros. live-action feature film Lad: A Dog (1962).

It was then split into three further shorts. The first one was "To Beep or Not to Beep" (1963), which was re-edited by its original director Chuck Jones and with its original music score by Milt Franklyn replaced by new re-orchestrated music by William Lava. The other two were assembled by DePatie-Freleng Enterprises in 1965 after they took over the Looney Tunes series, albeit with no alterations in the audio and footage whatsoever unlike the former due to lower budgets. The remainder split-up shorts were titled "Roadrunner a Go-Go" and "Zip Zip Hooray!"

Wile E. Coyote is reviewing his past attempts at catching Road Runner (in the form of stock footage from previous Coyote/Road Runner shorts), and making new, revised plans to catch him - which go just as wrong, if not more so than the first attempts.

In a mostly unrelated story, as two children (one of them Ralph Phillips) watch the Coyote on television, Ralph is talking about how much trouble he has concentrating on things and gets caught up in his daydreams (re-using footage from Jones' earlier short "From A to Z-Z-Z-Z") when his friend gave him a psychiatry session when Ralph constantly imitates Road Runner's sounds like "Beep-Beep! Zip-Bang!" After the session, Ralph declares he will never think of anything imaginative ever again before making the Road Runner sound once again when he rushes back to the TV. The other boy finally gives in to Ralph's imitations by saying that psychiatry isn't infallible and that Road Runner Phobia was one of the most difficult ones to break before making the Road Runner sound like Ralph was doing.

The two stories briefly link up when the Coyote breaks the fourth wall and directly addresses the kids on why he wants to eat Road Runner. This sequence features a television commercial for "The Acme Batman Suit! The only Batman uniform worn by bats!", which is newly narrated stock footage from "Gee Whiz-z-z-z-z-z-z". 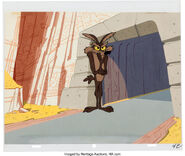 Production cel with a production background from "Zip 'n Snort"