Porky is a big-game hunter in darkest Africa. Porky and his crew run across Spencer Tracy as Stanley. They discover a native village where Cake-Icer (Kay Kyser) has the jungle jumping with his jive. 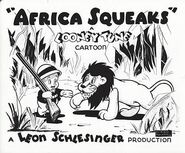