An Itch in Time

An Itch in Time

An Itch in Time is a 1943 Merrie Melodies short directed by Bob Clampett.

Elmer Fudd is laughing while lounging in his easy chair and reading his comic book, while his dog is comfortably sleeping nearby in front of the fireplace. Eventually, A. Flea comes bouncing by. The flea is dressed as a hillbilly with a big straw hat and is carrying a satchel with the name "A. Flea" on it. He gets out his telescope and spots the dog. The flea whistles in excitement, screaming "T- Bone!" He sings, "There's food around the corner; there's food around the corner!" The flea begins to find a suitable portion of the dog for him to eat or work on, which in turn bothers the dog, and he begins to scratch and bite the flea. Elmer soon notices this and threatens to give the dog a bath if he witnesses him scratching again. The dog makes his promise. The flea still searches for meat and uses pickaxes, jackhammers, and even explosives while the dog tries to withstand the suffering pain, but finally yelps and runs around. After that Elmer advances on the dog, and gets a hold of him after the dogs says "Oh no, not that!" A door bangs, but the dog still holds on the doorknob. However, the flea manages to get on Elmer, causing him to scratch, and the dog proceeds to carry Elmer and give him a bath. He promptly slips on a soap bar on the floor and lands in the bath. Then the tub breaks, and the flea soon carries the two away on a plate, singing 'There will be no more meatless Tuesdays for me...' A cat witnesses it and says, "Now I've seen everything!" and commits suicide by shooting himself with a pistol.

(1987) VHS
Foghorn Leghorn and His Friends 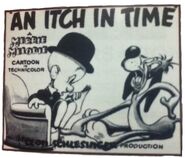 The scene that is cut from all modern airings