Animaniacs is an American animated sitcom created by Tiny Toon Adventures creator Tom Ruegger for the Fox Broadcasting Company which first aired on Fox Kids from 1993 until 1995; then the show appeared on The WB Television Network as part of its Kids' WB! afternoon programming block from 1995 to 2000. Animaniacs was the second animated series produced by the collaboration of Steven Spielberg and Warner Bros. Animation during the animation renaissance of the late 1980s and 1990s. The studio's first series, Tiny Toon Adventures, had proved to be a big hit among younger viewing audiences, and it had attracted a sizable number of adult viewers as well. Tiny Toon Adventures had drawn heavily from the classic Termite Terrace cartoons of old for inspiration, as well as plots and characterization. The modern Warner Bros. writers and animators, led by Tom Ruegger, used the experience gained from the previous series to create brand new animated characters that were cast in the mold of Tex Avery, Chuck Jones, and Bob Clampett's creations, but were not slavish imitations designed to rip other creations off. The show itself was a variety show, with many short skits featuring a large cast of unique characters. Each episode was traditionally composed of three short mini-episodes, each starring a different set of characters.

In 2017, Steven Spielberg/Amblin Entertainment and Warner Bros. Animation announced that they were collaborating on a revival TV series due to Netflix's popularity. [1] Netflix removed Animaniacs from its lineup on 1 October 2017 because Hulu signed a deal to stream the series in 2018.

In 2018, Amblin announced that Animaniacs would receive two more seasons exclusively for Hulu. Steven Spielberg announced, "Together with Warner Bros., we look to bring new audiences and longtime fans into this wild world of Yakko, Wakko, and Dot."[2] In the meantime, Warner Bros. has given streaming rights to Hulu for Tiny Toon Adventures (The Plucky Duck Show included), Animaniacs, Pinky and the Brain, and Pinky, Elmyra & The Brain, which were, at a point, all available for streaming on Netflix until 2017. Freakazoid!, another spin-off of Animaniacs, was not included in the deal.[3]

This show focused on the adventures of Yakko, Wakko, and Dot who claim to be the stars of some of the early Warner Bros. animated cartoons, which were so insane that the studio execs locked them away in the water tower at Warner Bros. Studios in Burbank, California. This description of the Warners is a tongue-in-cheek homage to Bosko, Warner Bros.' first cartoon character, whose cartoons were not highly regarded by many people. The red-nosed Warner siblings bear a striking resemblance to the portrayals of Bosko and his girlfriend Honey in a 1990 episode of Tiny Toon Adventures entitled "Fields of Honey". Afraid that the portrayals of Bosko and Honey as they were originally depicted might be deemed controversial, they were changed to anthropomorphic dog-like characters, and that episode served as the "bridge" between Tiny Toon Adventures and Animaniacs.

Originally, the Warners were intended to be ducks resembling Tiny Toons character Plucky Duck, but Tom Ruegger realized they'd been done enough by The Walt Disney Company (see DuckTales), so he made them indeterminate "cartoon character"-like children. Although they looked somewhat like dogs, their specific "species" remained in question. Ruegger also modeled their personalities a bit after his three sons (who all did voices on the series at one time or another). Notably, the characters also bear a resemblance to animated characters from the 1900s to the 1960s from other studios, including Felix the Cat and Oswald the Lucky Rabbit, Bimbo, and the original, early Mickey Mouse, as well as Bosko. In other words, simple black drawings with white faces were very common in cartoons of the 1930s, and it is to these sorts of characters that the Warners are meant to pay homage.

Animaniacs introduced a number of characters, main or recurring.

Animaniacs premiered 11 September 1993. New episodes of the show were aired during the 1993 through 1999 seasons, and episodes were rerun in syndication for several years after production of new episodes ceased. One feature-length direct-to-video Animaniacs film, Wakko's Wish, was released on VHS only in 1999, but was later released on DVD in 2014. The series was popular enough for Warner Bros. Animation to invest in additional episodes of the show past the traditional 65-episode marker for syndication; a total of 99 episodes were finally produced. One theatrical cartoon short film starring the Warner siblings, "I'm Mad", was produced and released to theaters in 1994 with the feature Thumbelina. The show introduced the popular cartoon characters Pinky and the Brain, who were subsequently spun-off into their own TV series in 1995.

Animation fans consider Animaniacs the high point of the Warner Bros. revival of the 1990s that was inspired by the original Termite Terrace. After Animaniacs, Spielberg collaborated with Warner Bros. Animation for a third time to produce the short-lived series Freakazoid, along with the Animaniacs spin-off series Pinky and the Brain. Warner Bros. also produced two additional "zany" and "madcap" series in the later half of the decade entitled Histeria! (much like Animaniacs, but focusing on American history) and Detention (an animated sitcom of several quirky junior high kids trying to get out of after-school holding), but neither of these series found a sizable audience, and they were both swiftly cancelled. At that time, Animaniacs shorts were being shown as part of The Cat&Birdy Warneroonie PinkyBrainy Big Cartoonie Show.

Warner Bros. cut back the size of its animation studio (the high cost and relatively low profit of its animated feature films of the period also had an effect on the studio), and production on further Warner Bros. animated comedy series ceased. Animaniacs and Tiny Toon Adventures continued to rerun in syndication on Kids' WB!, Cartoon Network, Nickelodeon, and Nicktoons through the 1990s into the early 2000s. In 2005, it was removed from the NickToons network, and did not return to air until January 2013 on The Hub (now Discovery Family), where it ran until 13 October 2014, when The Hub became Discovery Family. In the United Kingdom, however, it currently airs on Boomerang, while in Canada, it airs on Teletoon Retro.

The comedy of Animaniacs was a broad mix of old-fashioned wit, slapstick, pop culture references, and cartoon wackiness. The show also featured a number of educational segments that covered subjects from history to math to geography to science to social studies. These educational segments, while simplistic in nature, were at a considerably more advanced level than in such children's shows as The Muppet Show; in fact, most adults could probably learn something from the show's explanations of world geography, the voyage of Ferdinand Magellan, or the Panama Canal.

While episodes of the show did have their share of unpopular segments (such as the Hip Hippos and Katie Ka-Boom), a number of popular cartoons were aired during the series, as the new Warner Bros. animators poked fun at everything and everyone, including their own fans ("The Please Please Please Get a Life Foundation", which directly took from the alt.tv.animaniacs FAQ for its material).

While the show was popular among younger viewers (the target demographic for Warner Bros.' TV cartoons), a great deal of the show's subversive humor was aimed at an adult audience. In fact, one character, Minerva Mink, was soon de-emphasized as a feature character on account that her featured episodes were considered too sexually suggestive for the show's intended timeslot. Adults responded in droves, giving the show cult-hit status and leading to one of the first Internet-based fandom cultures. During the show's prime, the Internet newsgroup alt.tv.animaniacs was an active gathering place for fans of the show (most of whom were adults) to discuss the latest antics of the Warner Brothers and the Warner Sister. The online popularity of the show did not go unnoticed by the show's producers, and several of the most active participants on the newsgroup were invited to the Warner Bros. Animation studios for a gathering in August 1995 called Animania IV (gatherings of Animaniacs fans from the net were dubbed Animanias; most of them were simply groups of friends getting together to talk and watch videotaped episodes).

Animaniacs was a very musical cartoon, with every episode featuring an original score (and in many cases, several original songs). Each group of characters had its own sub-theme in the score, and the Hip Hippos, Pinky and the Brain, Chicken Boo, and Katie Ka-Boom even had their own full theme songs. The Slappy Squirrel and Rita & Runt themes were sung by the Warners. The Animaniacs series theme song (music composed by Richard Stone, lyrics by Tom Ruegger), which has a variety of alternate endings, won an Emmy Award for best song in the series' first season.

The three Warner siblings often performed songs, including parodies of classical and folk music, often with an educational twist, listing, for example, U.S. states or American presidents. Pinky and the Brain occasionally got songs to sing as well, and the most complicated songs in the series usually went to Rita, voiced by singer Bernadette Peters (poking fun at Broadway shows in general, and Stephen Sondheim's works in particular). Rita and Runt even took on Broadway directly with a parody of Les Misérables called Les Miseranimals, which aired early in the first season.

Three albums of music from the series were released: Animaniacs, Yakko's World, and Variety Pack, and the sing-along videos, especially "Yakko's World", remained some of the best selling skit compilation VHS tapes.

The final bars of the Animaniacs theme (as well as Bugs Bunny and the WB logo) are commonly used by Warner Bros. to begin various animated series.

The song "Yakko's World", with lyrics by Randy Rogel, is perhaps their most famous. Other well-known songs include "Wakko's America" and "Yakko's Universe". 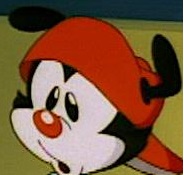 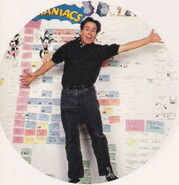 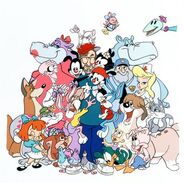 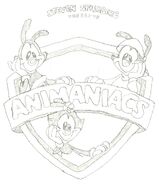 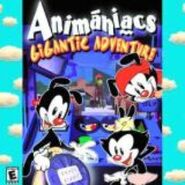 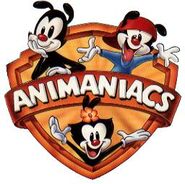