Associated Artists Productions (also known as a.a.p.) was a company that purchased the copyrights to the pre-1950 live-action Warner Bros. catalog plus the pre-August 1948 color Looney Tunes and Merrie Melodies library and all the black-and-white Harman-Ising Merrie Melodies (except Lady, Play Your Mandolin!) from Warner Bros. Associated Artists Productions also purchased copyrights to the black-and-white Popeye cartoons in 1956 from Paramount Pictures and the color Popeye cartoons in 1957 (including the 1957 Popeye shorts).

Associated Artists was founded in 1948 by Eliot Hyman. It handled syndication of 500 films, including the Republic Pictures and Robert Lippert libraries, but soon both companies entered television distribution. It also served as syndicator for Monogram Pictures (their 1936-1946 film library was purchased by a.a.p. in 1954) and Producers Releasing Corporation.[1]

In 1951, Hyman sold the company to David Baird's Lansing Foundation then to a newly started Motion Pictures for Television,Template:Clarify where Hyman served as a consultant. Hyman also became a partner in Mouline Production, production company on the 1956 film Moby Dick, while financing and producing other films and TV projects.[1]

In 1956, the company was refinanced and its name changed to Associated Artists Productions Corp. (a.a.p.). Lou Chelser's PRM, Inc. closed the purchase of the entire pre-1950 library's copyrights owned by Warner Bros. Pictures[2] in June 1956 for $21 million with a.a.p. and its theatrical subsidiary Dominant Pictures handling distribution sales.[3]

Copyrights to the black-and-white Popeye cartoons were also purchased from Paramount Pictures in June 1956.[4] The color cartoons' copyrights were purchased in 1957 (including the 1957 Popeye shorts).

By December 1957, a dispute over control of a.a.p. had gone to New York Supreme Court between the parties of a.a.p., National Telefilm Associates, and Harris minority shareholder group.[5]

The company filed for bankruptcy and was shut down again, this time, for good. Soon after, it was purchased by United Artists (UA) in 1958 with UA borrowing the full amount $27 million from Manufacturers's Trust when a.a.p. shareholders needed cash quickly. The a.a.p. purchase did come with uncollected accounts receivable amount around the purchase price.[6] The resulting division was named United Artists Associated, Inc. (u.a.a.). u.a.a. made a deal to distribute Beany and Cecil internationally. With the twin kids syndicated packages of Looney Tunes/Merrie Melodies and Popeye, u.a.a. took a look at a number of shorts in the a.a.p./pre-1950 WB library that appealed to kids and packaged them in a third group as The Big Mac Show with a cartoon wrap around.[7]

The cartoon library included every color Looney Tunes and Merrie Melodies short released prior to 1 August 1948, and all of the Merrie Melodies produced by Harman-Ising Pictures from 1931 to 1933, except "Lady, Play Your Mandolin!" (1931). The remaining black-and-white Merrie Melodies made from 1933 to 1934 and the black-and-white Looney Tunes were already sold to Sunset Productions. Former Warner cartoon director Bob Clampett was hired to catalog the Warner cartoon library. This purchase and the Popeye cartoons gave a.a.p. a library of over 568 theatrical cartoon shorts, which would be staples of children's television for many years.

Unlike WB's sales of the B&W Looney Tunes cartoon library (excluding the Harman-Ising Merrie Melodies) via Sunset Productions, a.a.p. was allowed to keep the WB references in the shorts intact; a.a.p. just inserted their logo, which played with a snippet of "Merrily We Roll Along", the Merrie Melodies theme, at the beginning of each cartoon. Despite this, a.a.p. cut off the original openings of three cartoons from the pre-1948 Looney Tunes library upon purchase: "Pop Goes Your Heart", "Bars and Stripes Forever" and "The Bear's Tale", although these three cartoons had their original openings restored but their original ending cards removed in the Turner "dubbed versions" in 1995.

Metro-Goldwyn-Mayer purchased United Artists (along with the a.a.p. library) from Transamerica Corporation in 1981 and became MGM/UA Entertainment Co.

Turner Broadcasting System (via Turner Entertainment) took over the library in 1986 after Ted Turner's short-lived acquisition of MGM/UA. When Turner sold back the MGM/UA production unit, he kept the MGM library, including portions of the a.a.p. library (limited to the Warner Bros. films and the Popeye cartoons), for his own company.

UA originally leased video rights to their library (including the a.a.p. library) to Magnetic Video, the first home video company. Magnetic Video was sold to 20th Century Fox in 1982, becoming 20th Century-Fox Video. In 1982, Fox and CBS formed CBS/Fox Video, which continued to distribute the UA/a.a.p. library under license from MGM/UA Home Video until the rights reverted to MGM/UA. After Turner's purchase of the MGM/UA library, MGM/UA Home Video continued to distribute the films on video under license until 1999, when the rights were transferred to Warner Home Video.

Original colors before 16mm negative deterioration? Could be. 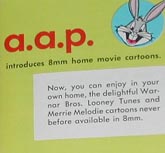 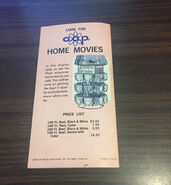 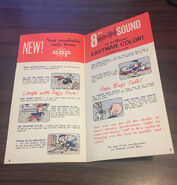 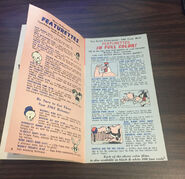 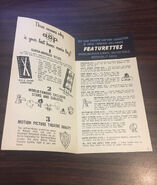 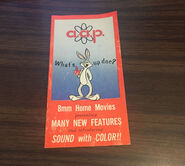 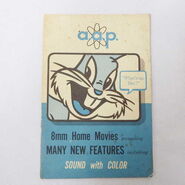