The British Broadcasting Corporation (BBC) is a British public service broadcaster. Its headquarters are at the Broadcasting House in London and is the world's oldest national broadcasting organisation and the largest broadcaster in the world by number of employees.

The BBC is established under a Royal Charter and operates under its Agreement with the Secretary of State for Culture, Media and Sport. Its work is funded principally by an annual television licence fee which is charged to all British households, companies, and organisations using any type of equipment to receive or record live television broadcasts and iPlayer catch-up. The fee is set by the British Government, agreed by Parliament, and used to fund the BBC's radio, TV, and online services covering the nations and regions of the UK. It also means the BBC does not run commercials.

As the BBC is required to serve all the people of the UK, this naturally includes children. Though this division first started in the 1930's, until 1985 all programming was shown in the same manner of regular adult programming with the standard BBC globe and faceless announcer. In 1985 this changed, with dedicated timeslots, presentation and even a presenter on BBC One and BBC Two. The block became known as Children's BBC, later shortened to CBBC. In 2002 the block launched a seperate channel, also called CBBC, though it took until 2013 for the block to leave BBC One and Two completely.

The BBC first began airing Looney Tunes as part of Rolf Harris' Cartoon Time, between 1979[1] and 1989[2]. Later, between 1990[3] and 1997[4], another show called Stay Tooned! with Tony Robinson began to air. Although Cartoon Time had simply been narration stringing together several cartoons, Stay Tooned! acted more as a DVD style behind the scenes show, looking at and interviewing the animators and history of the studios which produced the cartoons. In fact, the BBC was allowed to air banned shorts such as "Tin Pan Alley Cats" and "Angel Puss" because the BBC is not an American network, though these were shown with content warnings before airing. An additional reason could be that Stay Tooned! was airing them with historical context for viewers.

However, both of those shows were not aired as part of the CBBC block, airing instead as regular programming on BBC One and BBC Two. Following the cancellation of Stay Tooned!, CBBC commissioned Toonatics, using a similar formula to Cartoon Time which was released between 1997[5] and 1999[6]. In 1998, CBBC acquired the rights to Taz-Mania. It first aired on Monday December 21, 1998, appropriately with its first episode "The Dog the Turtle Story"[7]. It last aired on Tuesday December 20, 2005.[8] However, the shows title sequence used strobe effects which could effect epileptic viewers, made even worse by PAL speedup from 30fps to 25fps (meaning it ran faster), so an altered version was shown in its place.

CBBC itself began re-airing Looney Tunes/Merrie Melodies on Saturday August 31, 2002 in a 30-minute segment.[9] As the BBC held the rights to Looney Tunes and Merrie Melodies shorts primarily between 1948-1960, those were the ones shown, including shorts featuring Bugs Bunny, Daffy Duck, Speedy Gonzales, Charlie Dog, The Tasmanian Devil, Porky Pig, Tweety and Sylvester,[10] However shorts containing Pepé Le Pew were not shown due to concerns about his behavior. CBBC last aired Looney Tunes on Saturday June 24, 2006.[11]

Animaniacs, Tiny Toon Adventures, and Pinky and the Brain were never 'officially aired' by CBBC as the rights were held by a rival broadcaster which was not currently airing the shows and had announced their intention to not air it until the rights expired. However a loophole was worked out between the BBC and Warner Bros. The budget of the live Saturday morning game show Dick & Dom inda Bungalow would be increased by the exact price needed to air the shows. Dick & Dom already used the Looney Tunes/Merrie Melodies shorts, Taz-Mania and What's New Scooby Doo as 'cartoon breaks' to allow them to alter the set for the next game as they could use any show that CBBC had the rights too.[12] Thus, Dick & Dom inda Bungalow purchased the rights to air Animaniacs, Tiny Toon Adventures, and Pinky and the Brain in 2004, allowing them to air on CBBC, but only as part of the show itself. Like all cartoon breaks on Dick & Dom (except the Looney Tunes shorts) Animaniacs, Tiny Toon Adventures, Pinky and the Brain and Taz-Mania were edited, but not censored. These edits included an animated character appearing in the corner of the screen holding up a word for a competition, static towards the commercial break point before the TV in the Bungalow set exploded so more games could be continued[13], a newsreader recapping the cartoon when they returned back to it and the removal of the credits sequence, which would instead be aired after Dick & Dom's credits[14]. Dick & Dom ended on March 11 2006[15] and so those shows could not continue to air on CBBC. 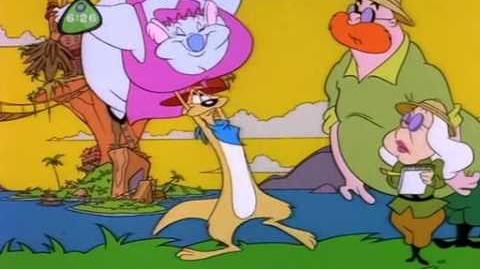 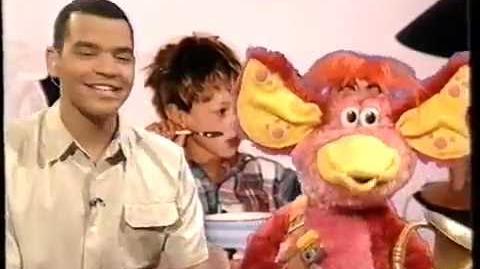 CBBC Breakfast Show before Taz Mania
CBBC presenters announcing that Taz-Mania is next. 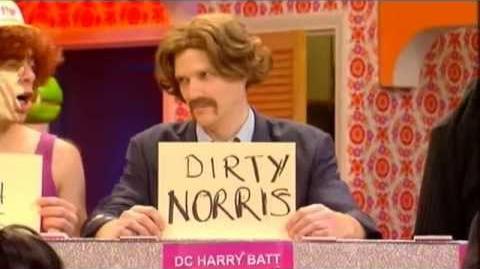 The Stay Tooned! logo in the title sequence.
Add a photo to this gallery

Retrieved from "https://looneytunes.fandom.com/wiki/BBC?oldid=180855"
Community content is available under CC-BY-SA unless otherwise noted.