Babbit and Catstello are not very bright. They prefer to attack there prey straight on rather than think up useful plans. Babbit is the smarter of the two, while Catstello is dumber speaking with a more stupid voice.

The duo first appeared in "A Tale of Two Kitties", in which they unsuccessfully attempted to catch Tweety Bird, but were outwitted by the bird.

Three years later, Babbit and Catstello reappeared in the similarly-named "A Tale of Two Mice". Though their characterizations were the same, the two were now mice, living in a hole in the wall of a typical cartoon kitchen.

Their goal in this cartoon was the cheese in the kitchen's refrigerator, the only obstacle being the resident housecat. Babbit attempts to coerce Catstello into going after the cheese solo, and eventually succeeds by using a book on hypnosis, convincing Catstello that he is strong, fearless, and capable of standing up to the cat. Every attempt ultimately fails, however, when the hypnosis wears off at a crucial moment, and Catstello has to make a mad dash back to the mousehole. Finally, Catstello is fed up with Babbit making him the fall guy, and turns the tables on both Babbit and the cat, hypnotizing them into believing they are, respectively, a cowboy and his trusty steed. Babbit utters a deliberately misworded variation on the Lone Ranger's classic catchphrase--"Hi yo, Sliver, awaaayy!"--before he and the cat gallop away.

The final scene shows Catstello eating cheese and reading a book on living alone, before turning to the audience and uttering one of his archetype Lou Costello's famous lines: "Oh--I'm a baaaaad boy!" (At one point in A Tale of Two Kitties, he similarly remarks, "I'm a baaaaad pussycat!")

The duo made their final classic appearance in "The Mouse-Merized Cat" directed by Robert McKimson. Here Babbit attempted to hypnotize Catstello into different things. At the end Catstello hypnotizes them both into being a cowboy and horse, while attempting to enjoy the place that they live in.

The pair have made few appearances since then, mainly cameos in modern Warner Bros. animated projects, such as The Sylvester & Tweety Mysteries where they were voiced by voiced by Corey Burton and Joe Alaskey.

Babbit and Catstello as cats in their original appearance.

Babbit and Catstello as dogs. 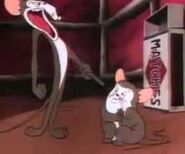 Babbit and Catstello as Mice.

Retrieved from "https://looneytunes.fandom.com/wiki/Babbit_and_Catstello?oldid=197845"
Community content is available under CC-BY-SA unless otherwise noted.