A massive baby boom is happening in the United States following the end of World War II; a newspaper headline reads "UNPRECEDENTED DEMAND FOR BABIES OVERWORKS STORK!" An overworked stork, who is a caricature of actor Jimmy Durante, is getting drunk in the Stork's Club, saying "I do all the woik, and the fadders get all the credit!" There is an emergency delivery in which inexperienced animals take the babies to their parents. As a result, babies are being sent to the wrong parents; another headline reads, "NATURALLY SOME SLIGHT MISTAKES HAVE BEEN MADE." A baby hippopotamus has been delivered to a Scottish Terrier, a baby alligator to a pig, a baby skunk to a goose, and so on.

To clear up the confusion, Porky Pig is brought in to manage the factory, with Daffy Duck as his assistant. The babies, including Tweety in a brief cameo, are going along a conveyor belt (to the tune of Raymond Scott's famous "Powerhouse") and sent by various animals via the aid of jet-powered mechanical storks which helps speeds up the baby deliveries, while Daffy mans the phones, making quick references to Bing Crosby, who had four sons, Eddie Cantor, who had five daughters and no sons, and the Dionne Quintuplets. "Mr. Dionne, puh-leeze!!", is Daffy's shocked reaction.

At first, things seem to be going smoothly until a stray egg is found without an address. Porky decides to have Daffy sit on it until it hatches, but Daffy refuses to sit around on top of an egg. Porky chases Daffy around the factory, complete with an imitation of Porky by Daffy, until they are stuck on the conveyor belt. The belt stuffs both of them into one package, with Porky as the legs and Daffy as the top half, and sends them to Africa, where a gorilla is waiting for her arrival. When the gorilla looks at the "baby," Porky peeks through the diaper, causing the gorilla to freak out and to cry on the telephone, "Mr. Anthony, I have a problem!!" 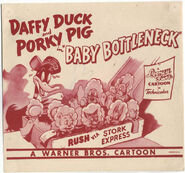