Bacall to Arms is a 1946 Merrie Melodies short planned by Bob Clampett and finished by Arthur Davis.

The title refers both to the phrase, "call to arms," and the late actress Lauren Bacall.

In a movie theater, various random gags occur before the film, such as one patron moving to another seat another patron taking the vacated seat, and so on, accelerating into a free-for-all. While the theater is in color, the films-within-the-film are black-and-white. A short "newsreel" is narrated by Robert C. Bruce.

The main feature is a film called To Have- To Have- To Have- ..., a parody of To Have and Have Not. It includes reasonably realistic, possibly rotoscoped images of Bogie and Bacall, who are credited as "Bogey Gocart and Laurie Bee Cool". In addition to recreating a few well-known scenes from that film, including the kissing scene and the "put your lips together and blow" scene. The players sometimes lapse into slapstick, like Bacall lighting her cigarette with a blowtorch like Harpo Marx or letting loose with a loud, shrill whistle after her famous sultry comment, and they interact with the theater audience.

Although the theater was initially full, it is eventually empty except for one patron: a lone wolf in a zoot suit who goes ga-ga over Bacall. The wolf grabs a cigarette that was dropped in the film and jumps off the screen, and Bogie shoots him. He hands it to Bogie, which explodes, covering him with "blackface". Bogie suddenly adopts a Rochester voice and says, "My, oh my! I can work for Mr. Benny now!" 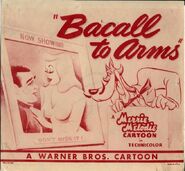 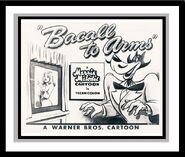