Bad Ol' Putty Tat is a 1949 Merrie Melodies short directed by I. Freleng.

By Tweety's house, at the top of a tall wooden pole, is a sign reading "DO NOT DISTURB." There is barbed wire on the pole and a damaged Sylvester.

Sylvester uses a trampoline to try to get to Tweety's birdhouse; Tweety fights back with knocks to the head and a dynamite stick. Sylvester tries to get Tweety to slide down a clothespin and into his mouth; he almost gets a rocket ride for his trouble.

Sylvester then paints his finger into a female Tweety which works at first, but then he switches hats with "her". Sylvester then tries to bite Tweety, resulting in Sylvester biting his own finger.

Tweety accidentally becomes the badminton birdy in a makeshift game. Again, Sylvester springs and gets another stick of dynamite. The cat then builds an entirely new birdhouse, fooling Tweety into walking right in. Instead of being digested, Tweety takes manual control of Sylvester, turning him into a train which crashes into a brick wall. 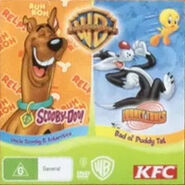 From a 1997 TNT recording (Note: TNT aired the LaserDisc print from Sylvester and Tweety's Bad Ol' Putty Tat Blues) before the debut of its two remastered versions; firstly the 1998 version for European VHS tapes and later shown on TV as of 1999, and then the 2001 I Love Tweety Japanese DVD version which was later on the Looney Tunes Golden Collection: Volume 2 DVD set on disc 3 in 2004