A baseball game in New York City is in progress. The two teams playing are the visiting Gas-House Gorillas, consisting entirely of big, aggressive, hulking tough guys, and the home team, the Tea Totallers, consisting entirely of weak and frail elderly men, one of whom claims that he is 93 1/2 years old. By that point, the Gorillas have dominated the entire game, and one of the Gorillas even belts the umpire into the ground after disagreeing with his call; he first said "BALL" but after the beat down, he changed it to "STRIKE", said that he was sorry and didn't know what had come over him, and then fainted and fell into a hole. Shortly after, the Gorillas go into a conga line making hit after hit after hit.

Bugs Bunny, who is watching the game from hole on the field, is fed up with the game and the Gas-House Gorillas playing dirty. He starts to trash talk them by saying that he could beat them all, all by himself. The Gorillas hear him and accept his challenge. And now Bugs is playing the entire team, with the scoreboard having Bugs' name replacing the Tea Totallers name.

Bugs decides to do a slowball. He winds up, then brakes and throws the ball slowly, sputtering like a car engine dying. Three Gorilla pitchers in a row strike out on this one pitch.

Next he goes up to bat. On his first time hitting the ball, the Gorilla that accepted Bugs' challenge is about to tag him out, until he is distracted by the sight of a pin-up picture, giving Bugs a safe run home and thereby scoring his first run. On his second hit while running the bases, that same Gorilla grabs the umpire and takes his place in an attempt to put Bugs out. This leads to an argument which ends with Bugs pulling his time-honored word-switching gag so that the umpire demands that he accept the safe call or go to the showers. He gives in, but the faux-umpire gets wise too late as Bugs scores his second run. Thirdly, another Gorilla runs to catch the ball. "I got it! I got it!! I GOT IT!!", he yells. The ball hits him so hard in the face that it drives him under the ground, and a tombstone pops up with the epitaph "He got it." The fourth hit sees another Gorilla smoking a cigar also taking it in the face, smashing the cigar and driving the fielder up against the fence, in front of a billboard that reads "Does your tobacco taste different lately?" The last hit has the ball hit each Gorilla player like they were elements from a pinball game. The scoreboard even flashes numbers and lights up the word "TILTED".

Bugs is back on the pitching and catching side. He makes a pitch and a Gorilla hits it and runs around the diamond. Bugs is waiting for him and tags him. As the Gorilla is hallucinating, Bugs holds up a sign that says "Was this trip really necessary?"

A song asking for the current scores is played and the scores show that Bugs is now in the lead 96-95.

Now in the last half of the ninth, according to the announcer, the Gorillas can win with a home run. One Gorilla chops down a tree to use as a bat. Bugs attempts to “paste this pathetic palooka with a powerful paralyzing perfect pachydermous percussion pitch”, but it is to no avail as the ball is hit. In desperation, Bugs chases after it. Bugs first takes a cab, but the tricky Gorilla is driving it and steers Bugs away from the flying ball. So Bugs quickly gets out and takes the bus which takes him to the Umpire State Building. Bugs goes up an elevator, goes up a flagpole, throws his baseball glove in the air and finally catches the ball. The Gorilla comes to the top of the building as well and corners Bugs. But the umpire also reaches the top by climbing and says "You're out!" This causes the Gas-House Gorillas to be disqualified for cheating and makes Bugs Bunny's team win. The Gorilla yells back at him, to which the Statue of Liberty comes to life, replying to the Gorilla, "That's what the man said, you heard what he said, he said that, you...!" with Bugs echoing her words. 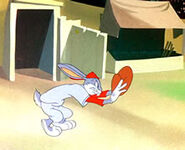 Bugs plays catcher. And second base. And third base. And shortstop...

"Where do ya get that malarkey, I'm safe!" 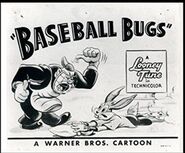 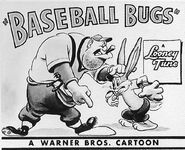