Looney Tunes Wiki
Register
Don't have an account?
Sign In
Advertisement
in: Birds, Characters, Looney Tunes: Back in Action,
and 19 more

Beaky is a lanky buzzard (although he more closely resembles a vulture or condor) with black body feathers and a white tuft around his throat. His neck is long and thin, bending halfway at an enormous adam's apple. His neck and head are featherless, and his beak is large and yellow or orange, depending on the cartoon. Beaky bears a perpetual goofy grin, and his eyes look eternally half-asleep.

The character first appeared in the 1942 cartoon "Bugs Bunny Gets the Boid", directed by Bob Clampett. The cartoon's plot revolves around the hapless attempts of the brainless buzzard, here called "Killer", to catch Bugs Bunny for his domineering mother back at the nest. Beaky's voice, modeled after ventriloquist Edgar Bergen's character Mortimer Snerd (and similar to that of Cecil Turtle), is provided by voice actor Kent Rogers. Clampett brought the character back in the 1945 film "The Bashful Buzzard", a cartoon that closely mirrors its predecessor, only this time featuring Beaky's hapless hunting without Bugs as an opponent. Rogers reprised his role as the character's voice for the film, but he died in World War II after finishing all his dialogue.

Warner Bros. featured Beaky in much of the Looney Tunes merchandising of the time. He also appeared in several issues of Dell Comics' Looney Tunes series of comic books, usually paired with another minor player, Henery Hawk.

Clampett left the studio in 1946, ending Beaky's career for a time. The character was eventually brought back in the 1950 Friz Freleng short "The Lion's Busy", now voiced by Mel Blanc. Freleng made the buzzard smarter, pitting him against a dim-witted lion named Leo. Bob McKimson also featured the character in a film that year, "Strife with Father". McKimson's Beaky is again back to his idiotic self, this time under the tutelage of his adoptive father, a sparrow who is trying to teach Beaky how to survive in the wild. In Beaky's final two cartoons, his brothers and Eastern European-accented mother however do not appear.

More recently, Beaky Buzzard has had minor roles in various Warner Bros. projects, such as Tiny Toon Adventures, where he plays the mentor of the minor character Concord Condor, and the movies Space Jam and Looney Tunes Back in Action, where he has a short cameo and is voiced by Joe Alaskey. He also appeared in The Sylvester & Tweety Mysteries in the episode "3 Days and 2 Nights of the Condor", where he was voiced by Jeff Bennett. Beaky's mother, who appeared in many of his original shorts, also appeared in an episode of the show (voiced by Tress MacNeille). Beaky was put in one episode of Duck Dodgers, and he appears in The Looney Tunes Show in the episode "Ridiculous Journey". 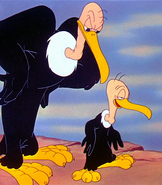 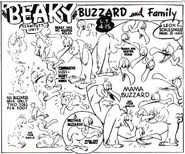 with Leo the Lion