Daffy Duck, in the role of Jack says, "Now there goes a salesman. He trades me out of a perfectly good, grade-A homogenized Holstein cow, and for what? Three stupid beans. Jack, you're a jerk."

He tosses out the beans, and they land right into Bugs Bunny's rabbit hole. A beanstalk erupts shortly after, and Daffy starts to climb it. During his climb, he meets Bugs, who is in bed, and selfishly kicks him away, not wanting him to interfere. Wanting revenge on Daffy for kicking him off the beanstalk, Bugs comments "I don't remember any rabbit in Jack and the Beanstalk, but there's gonna be one in this one!"

Meanwhile, Daffy reaches the top of beanstalk, excited about stealing the fortune that the giant's castle holds, until he meets the giant himself, who turns out to be Elmer Fudd. Daffy's excitement turns into fear and he runs from the giant just as Bugs reaches the top. As Elmer closes in on the duo, Elmer attempts to get Bugs, but Bugs tells the giant to get Daffy instead, because Daffy is playing as Jack. Daffy frantically tries to pass this off as a lie, and that Bugs is Jack and he is Aloysius. Elmer captures both of them and takes them to his castle, where he traps Bugs and Daffy under a glass cake cover so that he could grind their bones to make bread. However, they manage to escape because Bugs has a glass cutter with him. Elmer continues to chase the two around his castle as they are trying to escape until Bugs manages to trip Elmer, knocking him unconscious. Bugs wants to go home, however, the greedy Daffy decides to stay so that he can steal from the giant.

As Bugs is running towards the beanstalk, he comes across Elmer's carrot garden ready to be eaten. As a very full Bugs is resting under a half-eaten, giant carrot at night, his stomach now greatly swollen, he wonders what became of Daffy, who has been caught by giant Elmer and locked inside his pocket watch, pointing to numbers with his wings like the minute and hour hands and proclaiming, "Heh, it's a living."

The scene of Elmer sticking corks in his ears and trying to get Bugs and Daffy out of his head by smoking a cigarette was cut on CBS in the 1970s and 1980s, though he still says "Come on out of there, or I'll smoke you out!" Cartoon Network initially aired it uncut, but, between 2003 and 2010, alternated between airing an uncut version that had the smoking part and an edited version that didn't. Since 2011, Cartoon Network has aired it uncut and it now airs uncut on Boomerang. It also airs uncut on MeTV. 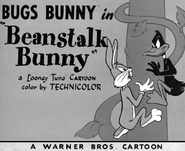