Looney Tunes Wiki
Register
Don't have an account?
Sign In
Advertisement
in: Cartoons directed by Robert McKimson, 1957, Shorts,
and 17 more

A box of carrots is dropped into the middle of a jungle in Tasmania. Bugs pops out, wondering how he went from sleeping in a carrot plop to the middle of Tasmania. Suddenly, a group of animals (both wild and domesticated) come running through the woods, scared for their lives (Bugs mistakes it for “chow time at the zoo”). A crocodile (who turns himself inside out into a bag for a disguise) hands Bugs a booklet talking about the Tasmanian Devil and the many things it eats. Bugs reads “Eats Aardvarks, Ants, Elephants, Antelopes, Cats, Bats, Dogs, Hogs, Crocs, Gators, Eagles, Fish, Deer, Wolves, Chickens, Giraffes, Gazelles, Octopuses, Wildebeests, People, etc. — bet there's no such animal.” While Bugs is going through the list, the Tasmanian Devil comes roaring in and greedily says that it 'especially' eats rabbits as it turns to the page that says it and eats the booklet. Bugs is able to temporarily fool Taz into thinking he's a monkey, which Tasmanian Devils don't eat (though one of the animals seen running for its life was a monkey — ostensibly because all animals are scared of Taz). However, Taz soon starts chasing Bugs again. Bugs tricks "Baggy Eyes" into getting crushed under a tree but Taz manages to exit through a knothole in the tree. Bugs jokes around wondering what Tasmanian Devil pancakes would taste like, but he lets his guard down and Taz grabs Bugs by his ears and asks him "What for you say you monkey, when you got little powder puff tail like rabbit, Rabbit?!" Bugs ends up on a spit, trussed like a roast pig, as Taz puts salt and pepper on Bugs, which results in Bugs sneezing. Bugs is really nervous, because he is about to be eaten for lunch and has no escape plan, but luckily he sees Taz making a large salad to go with him. Bugs compliments Taz on his "mean salad" but informs him that the best thing to have with a salad is "wild turkey surprise," not rabbit. Taz, wanting to try it, unties Bugs. Bugs, wearing a chef hat and faking an Italian accent, throws some sticks of dynamite together, lights the fuses and dresses the 'legs' up to look like they're from a turkey. Taz gobbles the dish, but doesn't seem too harmed from the explosion in his stomach. When Taz starts chasing Bugs again, Bugs runs into a store owned by a "Trader Mac" and buys some random items. He then disguises himself as a Tasmanian She-Devil, whom Taz goes gaga over. Bugs 'makes out' with Taz and, with a bear trap for lips, gives him a big kiss, driving Taz wild. This causes the real she-devil (whom Taz married at the end of "Devil May Hare" in 1954) to come in and smack him across the head with her rolling pin. Bugs comments, "She's a nice lady. Yeesh!" 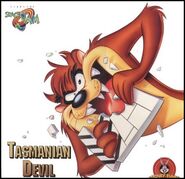 The version of this cartoon shown on ABC's The Bugs Bunny and Tweety Show had the following scenes cut:[1] 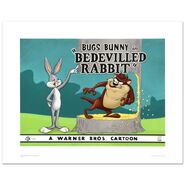 Production cel with a production background from "The Abominable Snow Rabbit"