Bedtime for Sniffles is a 1940 Merrie Melodies short directed by Chuck Jones.

In his little sardine can house, Sniffles tries to stay awake and wait up to see Santa on Christmas Eve. Sniffles is sweeping up and singing "Jingle Bells" while he waits for Santa. In just an hour, Santa will be here. He makes a cup of Haxwell Mouse Coffee and reads Good Mousekeeping magazine while he waits, only to have it all go to waste, as he falls asleep anyway. 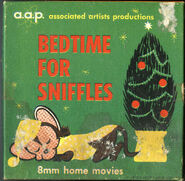 (1986) VHS
Viddy-Oh! For Kids Cartoon Festivals: The Best of Bugs Bunny and Friends

(1989) VHS
Sniffles the Mouse Sniffles and the Bookworm

(1992) LaserDisc
The Golden Age of Looney Tunes Volume 2, Side 10, Variations on a Theme 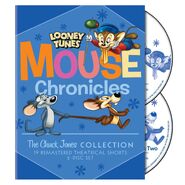