Road Runner flips the title cards by passing across. A chase begins and is then paused for Road Runner (Accelerati Incredibilus), then the Coyote (Carnivorous Vulgaris). Wile E. chases after Road Runner with a knife and fork. The Coyote strikes and misses, sticking the utensils into the road as Road Runner moves into super speed. Wile E, left suspended in the road, lets go of the knife and scratches his head, only to fall down. He slumps on the ground and soon comes up with a new plan. 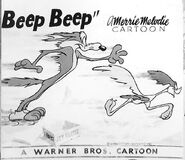 Production Background
Add a photo to this gallery

Retrieved from "https://looneytunes.fandom.com/wiki/Beep,_Beep?oldid=240941"
Community content is available under CC-BY-SA unless otherwise noted.