Sylvester has been "blackballed" out of membership to the Loyal Order of Alley Cats Mouse and Chowder Club again. To gain the long-coveted membership, the Loyal Order Grand Master offers to let the lisping puddy tat place a big bell around the neck of the largest mouse he can find, so the cats can pounce on the mouse when they hear the bell. Just as that's going on, Hippety Hopper escapes from a city zoo truck. It's not long before he encounters the hapless Sylvester. Each attempt to place the bell around Hippety's neck ends with Sylvester wearing the bell (and the cats unwittingly pounding Sylvester into submission). In the end, Sylvester finally does get the bell around Hippety's neck, but by the time the cats are ready to pounce on the baby kangaroo-mistaken-for-a-giant-mouse, Hippety has been recaptured. The oblivious cats end up jumping in front of the city zoo truck! With all of them out of commission, Sylvester now gets to serve as Loyal Order's Grand Master, only to "blackball" himself again, much to his chagrin. 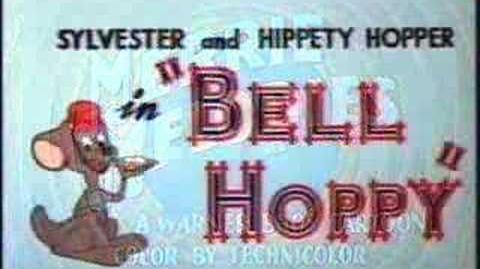