Colonel Rimfire runs Cool Cat out the jungle to blast him. Cool Cat then hides in a haunted house. Rimfire tries to ask the "owner" of the house for Cool Cat, and Cool Cat tricks Rimfire and slams the door on him. He finds the stove tingle but Cool Cat still manages to dodge the attacks.

The racket they make awakens a ghost named Spooky who was sleeping in a chest. Rimfire loses Cool Cat again, but finds the ghost and runs away in fear. Spooky spots Cool Cat and is scared as well. Spooky just wants to be friends, but Cool Cat and Rimfire both just want to get away from him. Spooky finds Rimfire hiding in a barrel and Rimfire jumps off without his hat and gun. Spooky attempts to carry it to Rimfire, while Cool Cat tries to find Rimfire. Cool Cat confuses Spooky in Rimfire's gear and runs off only to know the real person is and is stormed off again.

Spooky starts to use his ghostly powers and walk through walls. Cool Cat uses a curtain, which confuses Spooky and Rimfire as a spook. Rimfire is the first to run out of the haunted house, but Cool Cat follows and Spooky continues to follow Cool Cat. Cool Cat eventually runs out of breath, and Spooky sits with him to be ready for the "next race". 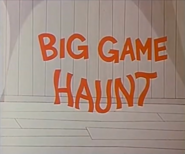 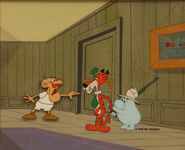