José Cuauhtémoc "Bill" Meléndez (15 November 1916 – 2 September 2008) was a Mexican-American character animator, film director, voice artist and producer. He is known for his cartoons for Walt Disney Productions (working on four Disney films, Pinocchio, Fantasia, Dumbo, and Bambi), Warner Bros. Cartoons, UPA, and the Peanuts series. Melendez provided the voices of Snoopy and Woodstock in the latter as well.

A native of the Mexican city of Hermosillo, Sonora, Melendez was educated in U.S. public schools in Douglas, Arizona. He was a very good student, and later attended the Chouinard Art Institute in Los Angeles, which would later become California Institute of the Arts.

Following the 1941 Disney strike, Bill was hired by Leon Schlesinger to animate in Bob Clampett's unit. After Clampett's departure, Bill moved to the Arthur Davis unit. When the number of animation units at Warner Bros. was reduced from four to three in 1948, Melendez, after being moved to Robert McKimson's unit for a time, moved over to United Productions of America (UPA) where he animated on cartoons such as "Gerald McBoing-Boing". Melendez also produced and directed thousands of television commercials, first at UPA, then Playhouse Pictures and John Sutherland Productions. In 1963, Melendez founded his own studio in the basement of his Hollywood home. Bill Melendez Productions is still active and is currently run by his son Steven Melendez. In addition to animation, Melendez was once a faculty member at the University of Southern California's Cinema Arts Department.

Melendez was the only person Peanuts creator Charles M. Schulz trusted to turn his popular comic creations into television specials. He and his studio worked on every single television special and direct-to-video film for the Peanuts gang and Melendez directed the majority of them. He even provided the vocal effects for Snoopy and Woodstock in every single production, voice acting the characters in the studio by uttering gibberish, and the voices were mechanically sped up at different volumes to represent the two different characters. According to a New York Times article shortly after his death, Melendez did not intend to do voice acting for the two characters. "Schulz would not countenance the idea of a beagle uttering English dialogue, Mr. Melendez recited gibberish into a tape recorder, sped it up and put the result on the soundtrack.“ He also directed, did the animation for, and provided voice acting in the first four Peanuts theatrical films, A Boy Named Charlie Brown (1969), Snoopy, Come Home (1972), Race for Your Life, Charlie Brown (1977), and Bon Voyage, Charlie Brown (1980). The last Peanuts-related production he worked on was the 2006 He's a Bully, Charlie Brown. Archive recordings of his work as Snoopy and Woodstock were used in The Peanuts Movie.

Melendez and Lee Mendelson, who also worked on the Peanuts specials, films, and TV shows, formed their own production team and did other animated specials. They were responsible for the first two Garfield animated specials, Here Comes Garfield and Garfield on the Town, as well as Frosty Returns, the pseudo-sequel to Rankin/Bass' Frosty the Snowman.

Melendez died at his home in Santa Monica at the age of 91. He had been in declining health after a fall a year earlier. He was survived by his wife of 68 years, the former Helen Huhn, his two sons Steven Cuitlahuac (Melendez) and Rodrigo Cuauhtémoc (Melendez) -a retired US Navy Rear Admiral, six grandchildren and thirteen great-grandchildren.

For now, see the Category:Cartoons animated by Bill Melendez. 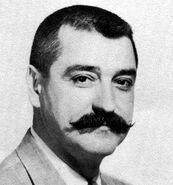 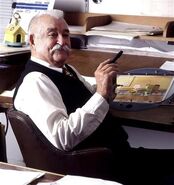 Bill with the Sherman Brothers

Retrieved from "https://looneytunes.fandom.com/wiki/Bill_Melendez?oldid=246968"
Community content is available under CC-BY-SA unless otherwise noted.