Sylvester catches Tweety and is about to eat him, but he is interrupted by another cat named Clarence. Clarence claims that eating birds can become a serious addiction, and hands Sylvester a business card for a support group called Birds Anonymous. Sylvester goes to a meeting and hears the testimony of several cats and decides to kick the habit. Back home, he turns on the television, but a cooking program featuring a roast bird tempts him. He turns on the radio to distract himself, but it plays "Bye Bye Blackbird" and "When the Red Red Robin Comes Bob-bob-bobbin' Along". He handcuffs himself to the radiator so he can't reach Tweety, but desire overcomes him, and he pulls it right out of its fittings. He grabs the bird, but just as he is about to pop it in his mouth, Clarence shoots a plunger in Sylvester's face to stop him.

That night, Sylvester can't sleep because he is in withdrawals. "Just one," he rants, "I'll quit after just one more." He grabs Tweety, and Clarence stops him again by pouring alum in his mouth, which makes him pucker so much that he physically cannot fit Tweety inside. Sylvester finally breaks down, admitting he can't help himself. Clarence demonstrates how to love birds without eating them. He plants a kiss on Tweety's head, but the taste of the bird overcomes him, and he starts chasing Tweety himself. Sylvester intervenes and tries to restrain him. Tweety remarks, "Once a bad puddy tat, awways a bad puddy tat!". 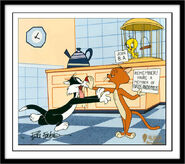 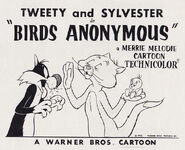 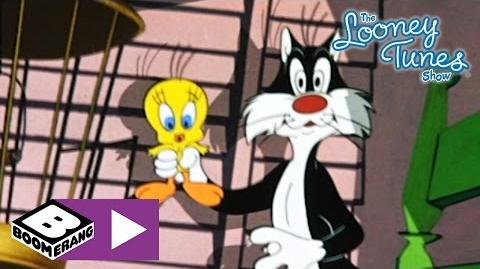