Birth of a Notion

Birth of a Notion

Birth of a Notion is a 1947 Looney Tunes short planned by Bob Clampett and finished by Robert McKimson.

The title is a play on The Birth of a Nation, but there is no connection to that film.

Daffy doesn't feel like going to the trouble of flying south for the winter like other ducks. He manages to con the rather simple-witted dog, Leopold, into letting him stay for the winter by pretending to have saved Leopold's life. Unfortunately, Leopold's master is a mad scientist who needs the wishbone of a duck for his experiment.

Daffy, understandably, is not keen on this notion, but instead of finding another place to stay, he keeps trying to get rid of the scientist, while Leopold tries to save his master's life. At one point, Daffy throws a baseball bat at the scientist from behind, and Leopold grabs it in time to keep the impact non-lethal; however, his master misunderstands, taking the bat away and breaking it into many pieces with his bare hands, while quietly intoning "Don't you know that might make me very angry, and I would do terrible, horrible things to you!" before patting a terrified Leopold on the head and saying "I'm going to bed now, Leopold."

Daffy then attempts to kill the scientist while he's sleeping. But it backfires when the scientist wakes up and starts to go after Daffy. Meanwhile, Leopold feels all too left out of the picture.

Daffy finally leaves and Leopold left after him when his master had a sudden desire for a dog's wishbone. So Daffy goes to another house, only to find another duck (with a Joe Besser-like voice and characterization) already there. That other duck kicks him into the air (the Southern way). So Daffy decides to give in and fly south, jet-propelled. On his flight, he is surprised to find he has company: Leopold, somehow aided by a fan strapped to his back, is flying south too, to flee away from his wishbone-crazed master.

Daffy attempting to throw the baseball bat onto Leopold's master

"Give me your wishbone!" 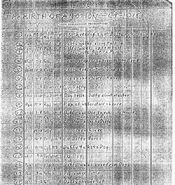