Black Velvet was a woman whose eyes were damaged when the meteor hit, forcing her to live in darkness. She also has a mechanical arm and an ability to create and manipulate darkness. Velvet planned to use a device, called the Shroudcaster, to cover the entire planet in permanent darkness.

Velvet kidnapped Tech E. Coyote (And brainwashed him) to help her complete her task. She also had an army of Shadowborgs (who are also brainwashed), with which she stole the necessary components. However, Danger Duck was able to break her hold over Tech using an annoying cell-phone ringtone and the rest of the Loonatics reversed the polarity of the Shroudcaster. With the device's destruction came the implosion of city blimp, she was said to have gotten away by Zadavia. 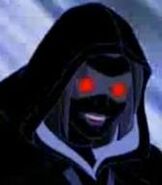 Add a photo to this gallery
Retrieved from "https://looneytunes.fandom.com/wiki/Black_Velvet?oldid=140785"
Community content is available under CC-BY-SA unless otherwise noted.