Robert Emerson "Bob" Clampett (8 May 1913 - 2 May 1984) was an American director, producer, animator, and puppeteer. He is best known for his work with both of Warner Bros.' cartoon series, Looney Tunes and Merrie Melodies.

Robert Emerson Clampett was born in San Diego, California, to Joan and Robert Clampett. When he was a toddler, he and his family moved to Hollywood, where they lived next door to actor Charlie Chaplin and his brother Syd.[1] While growing up in Hollywood, Bob was interested in and influenced by actors Douglas Fairbanks, Lon Chaney, Charlie Chaplin, Buster Keaton, and Harold Lloyd.[2] At the ages of four and five, Bob showed extraordinary drawing talent which led to him wanting to do art, but decided to step up to cartooning and make comic strips.[3] Later, Bob showed an interest in animation, filmmaking and puppetry. He also began making his own short films subjects in his garage.

At the age of twelve, Bob had his cartoons published by the Los Angeles Times including a full-page comic about the nocturnal adventures of a pussycat that was published in color in the Sunday edition. King Features Syndicate saw this and offered him a contract to start at seventy-five dollars a week when he finished high school. However, when Bob saw animation for the first time, he decided to become an animator and work for Warner Bros. cartoons, where he was paid ten dollars a week.[4]

Bob attended both Glendale High School and Hoover High School in Glendale, California, but dropped out of Hoover a few months short of graduating. One of his early jobs was working at a doll factory that was run by his aunt, Charlotte Clark. Bob helped design the first Mickey Mouse doll, due to the rising popularity of the character, but he was unable to find a drawing of the character so he decided to go to a movie theater and sketch some drawings of Mickey from what he saw.[4]

Bob started working at the Harman-Ising Studio in 1931, and the first cartoon that he animated was the first Merrie Melodies cartoon, "Lady, Play Your Mandolin!" He had also worked on the Merrie Melodies short "I Haven't Got a Hat" which introduced the character Porky Pig, whom Clampett helped develop, and who would eventually become a star. Later when Tex Avery joined in 1935, Clampett joined his unit alongside Chuck Jones, Virgil Ross, Sid Sutherland, Cecil Surry, Elmer Wait, and Robert Cannon. Clampett left Tex's unit in 1937 alongside Chuck Jones to work for Ub Iwerks at his studio in Beverly Hills where he directed his first cartoon "Porky's Badtime Story". He had also directed the animated opening sequence in the 1937 Joe E. Brown film When's Your Birthday?[5] Clampett had directed the Looney Tunes cartoons which were produced in black and white under the management of Ray Katz, Leon Schlesinger's brother-in-law.[6] After Tex Avery left Warner Bros. in 1941 to work for Jerry Fairbanks, Clampett took over his unit while Norman McCabe took over Clampett's old unit until he was drafted into the Army and was replaced by Frank Tashlin and eventually Robert McKimson. He left on 7 May 1945 to pursue a career in television and following his departure, Arthur Davis took over his unit[7] until it was disbanded in 1947 due to budget problems that Warner Bros was facing.[8] Clampett left behind four cartoons that he planned to direct: "The Goofy Gophers" and "Bacall to Arms", which were both finished by Arthur Davis.[9] After Arthur had finished both cartoons, he threw out the other two cartoons that he had in production and gave them to Friz Freleng and Robert McKimson to finish. "Tweetie Pie" was finished by Friz Freleng, and "Birth of a Notion" was finished by Robert McKimson.

After Looney Tunes, Clampett left to work at the Screen Gems cartoon studio for which former Warner Bros. producers Ray Katz and Henry Binder served as producers. He worked as a story editor[10][11] on several cartoons including "Cockatoos for Two" and "Boston Beanie" which were both written by Warner Bros. storymen Michael Maltese and Tedd Pierce.[12] In 1947, he directed one cartoon titled "It's a Grand Old Nag" starring Charlie Horse.[13] Two years later, he also created the show Time for Beany (which was parodied in a Pinky and the Brain short), and its animated spin-off Beany and Cecil.

In his later years, Bob Clampett toured college campuses and animation festivals as a lecturer on the history of animation.

Clampett died of a heart attack in his hotel room in Detroit, Michigan,[14] six days before his 71st birthday, while touring the country to promote the home video release of Beany & Cecil cartoons.[15]

Despite his legacy, Bob has been savaged by his coworkers at Warner Brothers, many of whom called him a "shameless self-promoter who provoked the wrath of [his] former [coworkers in later years] for allegedly claiming credit for ideas which were not [his]." Chuck Jones particularly disliked him, and therefore made no mention of him in his 1979 compilation-film The Bugs Bunny Road-Runner Movie, or his biography Chuck Amuck. In addition, voice-actor Mel Blanc accused Bob of being an "egotist who took credit for everything." Some of this antipathy may have been connected to Bob's "golden boy" status at the studio (his mother was said to be a close friend of producer Leon Schlesinger), which allowed him to ignore rules that everyone else was expected to follow. He also mentioned many things that were not true, in Bugs Bunny Superstar. 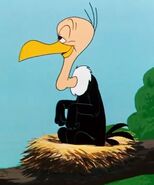 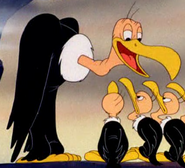 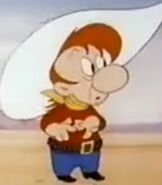 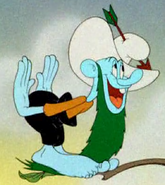 The Little Man from the Draft Board 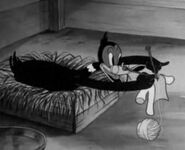 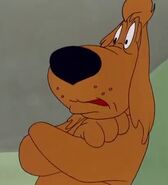 Gremlins from the Kremlin 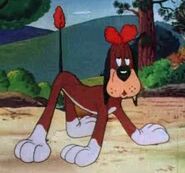 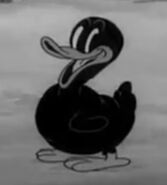 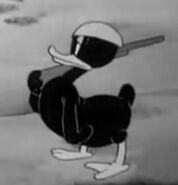 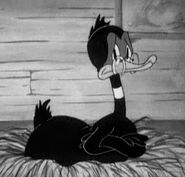 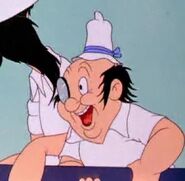 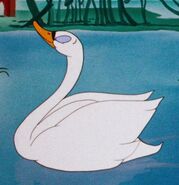 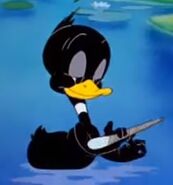 Bob (right) as a young boy with his father

Clampett with his animation unit c. 1938

Clampett with his animation unit probably taken in 1942

Clampett, in the center, with Michael Sasanoff, Thomas McKimson, and Hubie Karp during the production of The Great Piggy Bank Robbery circa. 1945 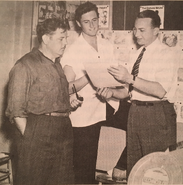 Clampett with Melvin Millar and Warren Foster circa. 1940

Bob with a young John Kricfalusi

Bob with a puppet of Cecil the Seasick Sea Serpent

Clampett with his wife Sody and Ollie Johnston

A caricature of Clampett drawn by Tex Avery from Bugs Bunny: Superstar 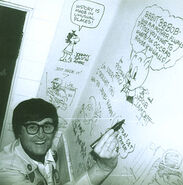 A baby photo of Bob that would serve as the inspiration for Tweety. 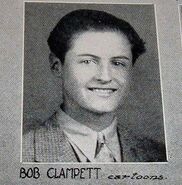 Bob during the production of "Coal Black and de Sebben Dwarfs" c. 1942

Bob with his wife Sody and their children holding puppets of the characters that Clampett had created.

Bob with his daughter Ruth as a baby. 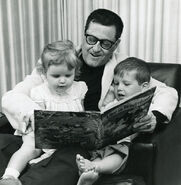 A tribute to Bob Clampett following his death[18]