An archaeologist at a museum scolds his small, silent dog Shep for supposedly removing a bone belonging to a dinosaur skeleton and orders Shep to bring the bone back, but Shep finds that the place where he buried his most recent bone has been dug up and a bulldog is walking away with the bone in his mouth. Shep chases the bulldog and so begins a battle of wits with the bulldog in a spacious yard surrounding the bulldog's house. After hoodwinking the dog into trading the bone for a giant plaster bone facsimile loaded with dynamite connected to an ignited fuse, Shep waits for the explosion, then flees the enraged bulldog. He goes back to the museum with the bone in his mouth, but to his dismay, he learns from the archaeologist that the archaeologist had the bone in question in his pocket all the time, and that the bone Shep had labored to retrieve had just been an old soup bone. 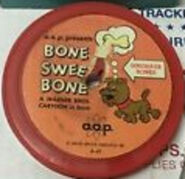