The title is a pun, as a Revue is a variety show, while a Review is an evaluation of an artwork; this pun is however not retained in the reissue.

After midnight at a closed bookstore, there are strains of "Moonlight Sonata". The storefront is realistic, suggesting it was rotoscoped. Then, an inebriated "cuckoo bird" pops out of a cuckoo clock to announce the arrival of midnight (and signaling the "cuckoo" activities to follow). On a book cover called COMPLETE WORKS of Shakespeare, Shakespeare is shown in silhouette while his literally-rendered "works" are clockwork mechanisms, along with old-fashioned "stop" and "go" traffic signals, set to the "ninety years without slumbering, tick-tock, tick-tock" portion of "My Grandfather's Clock".

On a book titled Young Man with a Horn, a caricature of Harry James breaks loose with a jazz trumpet obbligato similar to James' "You Made Me Love You", instead resolving into the standard, "It Had to Be You". A striptease is about to begin on the cover of Cherokee Strip. Book covers for The Whistler and The Sea Wolf show their characters shouting and whistling at the off-screen action. The Sea Wolf's howl segués into a sentence, "How ooooold is she?" The now-panting Shakespeare silhouette's inner workings explode in a shower of gears and clocksprings.

The catcalls continue with Henry VIII also howling like a wolf and then barking like a seal. Referencing a catchphrase of the popular radio program, The Aldrich Family, the king's "mother" calls out, "Hen-REEEE! Henry the Eighth!" "Coming, mother!" is the king's cracking-voice reply, and he runs to the book cover where Mother waits. As she begins to spank her "naughty boy", a new singing voice and caricature appear, namely that of Frank Sinatra. The gray, blanketed, emaciated character, overemphasizing Sinatra's real-life physique, enters on the cover of The Voice in the Wilderness. A large, male orderly pushes the Sinatra character in a wheelchair. Sinatra begins to croon the lyrics of "It Had to be You" into a ribbon microphone.

Now the women take their turn at hysteria. Henry's mother, bobby-soxed versions of Little Women, Whistler's Mother and Mother Goose (and her hatchling) begin to whistle and catcall (just as the men did for Cherokee Strip), and swoon and faint at the sound of Sinatra's voice, each of them uttering the catchphrase "Fraaankie!" before passing out.

A full-blown jam session begins, with a lively swing version of "It Had To Be You". Joining Harry James are the Indian on the cover of Drums Along the Mohawk, who morphs into a realistic-looking Gene Krupa (his drum set is labeled "GK"); Benny Goodman (as The Pie-Eyed Piper; some mice cheer, "Yeah, Benny!"); and Tommy Dorsey.

Annoyed by the revelry, Daffy Duck steps out of the cover of a Looney Tunes comic book (in the background is a book by "Ann Anonymous" titled The Invisible Man: A Biography of Robert Clampett), dons a zoot suit and a curly, blond wig, shouts for the celebration to "STOP!" and the jam session screeches to a halt. Daffy stands in front of the cover of Danny Boy, and effects Danny Kaye's Russian-accented characterization heard in Kaye's debut 78 album. Daffy says "POOEY!" to jazz and swing music, and reminisces about his "native willage" and "the happy peoples sitting on their balalaikas, playing their samovars" (misusing those two Russian terms).

Daffy starts talking about a girl named "Cucaracha", parodying Lucky Strike cigarette ads: "so round, so firm, so fully packed, so easy on the draw!" Daffy does a wild, short version of "La Cucaracha" in his normal character mode, including his "hoo-hoo" bit.

Noticing Red, Daffy zooms back and stations himself between her and the house, launching into a wild scat - again a reference to the same Danny Kaye debut album - to warn her of the wolf, complete with mock chewing on her leg for emphasis. The wolf appears, and Red screams and runs away. The wolf begins to sprinkle salt and pepper on Daffy's leg. Daffy halfway notices, turns back to "bite" the now-gone Red, then turns toward the wolf with a startled and outrageous double-take, turning into a giant eyeball for a couple of seconds.

The wolf chases Daffy through Uncle Tom's Cabin and other classics, and is stymied trying to cut down Daffy who is hiding in the Petrified Forest. Meanwhile, the police have been alerted ("Calling all cars!") and the wolf is apprehended by The Long Arm of the Law just as he was about to kill Daffy. The Judge sentences the wolf to Life, as the wolf sings part of the sextette from Donizetti's Lucia di Lammermoor - "You can't do dis to me / I'm a citizen, see!" The wolf is suddenly bonked over the head with a nightstick, and then makes his Escape and runs through the volumes.

Jimmy Durante, illustrating the cover of So Big, turns toward the wolf, and his huge nose trips the wolf, who goes sliding down Skid Row, nearly falling into Dante's Inferno. The wolf scrambles to the top, but the Sinatra caricature reappears, held in the orderly's hands as if he were a doll. The Wolf, being in the grandma archetype, swoons at the sound of "Frankie!", just as the female characters did, and skids head first into the inferno.

The other book cover characters loudly cheer and dance to a jazz/swing version of "Carolina in the Morning", the Wolf makes one final appearance to shout, "Stop that dancing up there! ... ya sillies!" This last bit is the actual title of a 1944 song by Harry "The Hipster" Gibson, along with a lisping delivery of "sillies" caricaturing Joe Besser. 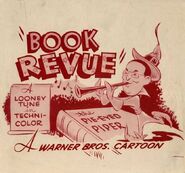 Retrieved from "https://looneytunes.fandom.com/wiki/Book_Revue?oldid=202566"
Community content is available under CC-BY-SA unless otherwise noted.