Bosko is an animated cartoon character created by animators Hugh Harman and Rudolf Ising. Bosko is the first recurring character in Leon Schlesinger's cartoon series, and is also the star of over three dozen Looney Tunes shorts released by Warner Bros. He was voiced by Carman Maxwell and Johnny Murray during the 1920s and 1930s, and once by Don Messick during the 1990s.

In 1927, Harman and Ising were still working for the Walt Disney Studios on a series of live-action/animated short subjects now known as the Alice Comedies. Hugh Harman created Bosko in 1927 to capitalize on the new "talkie" craze that was sweeping the motion picture industry. Harman began thinking about making a sound cartoon with Bosko in 1927, before he even left Walt Disney.[1] Hugh Harman made drawings of the new character and registered it with the copyright office on 3 January 1928.[2] The character was registered as a "Negro boy" under the name of Bosko.[3]

After leaving Walt Disney in the spring of 1928, Harman and Ising went to work for Charles Mintz on Universal's second-season Oswald the Lucky Rabbit cartoons. April 1929 found them moving on again, leaving Universal to market their new cartoon character. In May 1929, they produced a short pilot cartoon, similar to Max Fleischer's Out of the Inkwell cartoons, "Bosko the Talk-Ink Kid" that showcased their ability to animate soundtrack-synchronized speech and dancing. The short, plotless cartoon opens with live action footage of Ising at a drafting table. After he draws Bosko on the page, the character springs to life, talks, sings, and dances. Ising returns Bosko to the inkwell, and the short ends. The short is a landmark in animation history as being the first to include synchronized speech. This cartoon set Harman and Ising "apart from early Disney sound cartoons because it emphasized not music but dialogue."[4] The short was marketed to various people by Harman and Ising until Leon Schlesinger offered them a contract to produce a series of cartoons for the Warner Bros. It would not be seen by a wide audience until 71 years later, in 2000, as part of Cartoon Network's special Toonheads: The Lost Cartoons, a compilation special of rare material from the Warner Bros/Turner archives.

In his book, Of Mice and Magic, Leonard Maltin states that this early version of Bosko was in fact a cartoonized version of a young black boy... he spoke in a Southern Negro dialect... in subsequent films this characterization was eschewed, or perhaps forgotten. This could be called sloppiness on the part of Harman and Ising, but it also indicates the uncertain nature of the character itself.

Schlesinger saw the Harman-Ising test film and signed the animators to produce cartoons at their studio for him to sell to Warner Bros. Bosko became the star vehicle for the studio's new Looney Tunes cartoon series. Bosko wore long pants and a derby hat, and he had a girlfriend named Honey and a dog named Bruno. He was also sometimes accompanied by an orphan cat named Wilbur and an often antagonistic goat, particularly in early cartoons.

Although Harman and Ising based Bosko's looks on Felix the Cat, Bosko got his personality from the blackface characters of the minstrel and vaudeville shows popular in the 1930s. In keeping with the stereotypes of the minstrel shows, Bosko is a natural at singing, dancing, and playing any instrument he encounters. In fact, Bosko has the ability to play virtually anything as an instrument, be it a wooden bridge-turned-xylophone or a Dachshund-turned-accordion. In early cartoons, Bosko (voiced by Carman Maxwell) even speaks in an exaggerated version of black speech (However, this was only in the first cartoon. All later cartoons would give him a falsetto voice). Despite the parallels between Bosko and the blackface performers, Ising in later years would deny that the character was ever supposed to be a black caricature, and rather claim he was supposed to be "an inkspot kind of thing."

From his first Looney Tunes outing, "Sinkin' in the Bathtub", Bosko would star in 39 musical films (one of which was not released). His cartoons are notable for their generally weak plots and their abundance of music, singing, and dancing (though there were exceptions, such as "Bosko the Doughboy", in 1931). These were the early days of sound cartoons, and audiences were enthralled simply to see characters talking and moving in step with the music. In terms of animation, the shorts are on-par with Disney's shorts of the same period. Harman and Ising were allowed production costs of up to $6000 per cartoon.[4] During the same period, Disney was spending around $10,000 per cartoon.[5] The smaller budgets forced Harman and Ising to recycle footage much more often than Disney did. In terms of music and sound recording, however, Harman and Ising had one up on Disney as the Warner Bros. provided access to a large musical library with all the popular tunes of the day, lavish orchestras (e.g. Abe Lyman) and sound recording equipment and staff free of charge whereas Disney had to pay for all this himself.[5] Disney also had another handicap, he had no access to a music library and was forced to rely, for the most part, on public domain music. In addition, Harman and Ising did not have to worry over details concerning the distribution of their cartoons as the Warner Bros. handled all this.[5]

Vaudeville was the major entertainment of the time, and the cartoons of the era are better understood when compared to it rather than to animation of later decades. Though they might seem boring and rudimentary by today's standards, Bosko's films were quite popular in their day and he rivaled Mickey Mouse in popularity in the early 1930s, although the Disney cartoons would eventually surge ahead in popularity on the basis of stronger plot and character development.

In 1933, Harman and Ising broke with Warner Bros. over budget disputes with Schlesinger. Having learned from Walt Disney's experiences with Oswald the Lucky Rabbit, they had carefully kept all rights to the Bosko character, and they took him with them. The two found work with MGM where they launched the Happy Harmonies cartoon series. At first, Bosko appeared in his original design and some of the old animation from the Looney Tunes series was even reused in those Happy Harmonies that features Bosko. After only two cartoons, the character was redesigned into an identifiable black boy with an overactive imagination. This redesigned Bosko, whom many consider to be a different character altogether, in spite of having the same name, only starred in a handful of cartoons before Harman and Ising discontinued the character.

Bosko made a surprise cameo in a 1990 episode of the television series Tiny Toon Adventures called "Fields of Honey", in which Babs Bunny, after being told by the Acme Looniversity's mysterious vaultkeeper about Honey (voiced by B.J. Ward), is led by a mysterious voice to build a theater that shows nothing but cartoons of Bosko's girlfriend, Honey. Babs does so, and the resulting audience laughter rejuvenates the ailing Honey and reveals the voice, as well as the vaultkeeper to be none other than Bosko (voiced by Don Messick) himself. Curiously, the cartoon depicts Bosko and Honey as dog-like funny animals similar to the lead characters of the later TV show Animaniacs, presumably so as not to offend viewers with the original black-face characterizations. Another reason may be that this episode served as a "bridge" between Tiny Toons and Animaniacs. In an even briefer cameo, Bosko is seen in a portrait in the 1996 movie Space Jam, this time in his original form. He also appears in his original form in the Animaniacs cartoon, "The Girl with the Googily Goop", in which he is seen parking his car. 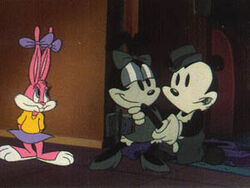 At present, all the Bosko cartoons still under copyright are owned by Warner Bros., as are the original film elements of those cartoons that have fallen into the public domain. The WB cartoons are under direct ownership of the studio itself, while WB also handles distribution for the MGM cartoons, owned by corporate sibling Turner Entertainment. Time Warner has also acquired rights to the character himself, allowing his appearances in the 1990s to happen.

Bosko comic strip from the 1930s

Bosko during the MGM years 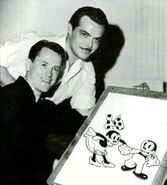 Retrieved from "https://looneytunes.fandom.com/wiki/Bosko?oldid=194945"
Community content is available under CC-BY-SA unless otherwise noted.