Lloyd Turner
William Scott (credited, but did not contribute to the cartoon[1])

Bugs Bunny stands at the base of the Brooklyn Bridge, about half a mile from the southern end of the actual street called the Bowery, telling an old man a story, in carnival-barker style, about how and why Steve Brody jumped off the bridge in July 1886 in the form of pictures. Steve Brody had a terrific run of bad luck. He decided he needed a good luck charm, ideally, a rabbit's foot, and the place he hoped to find it was in the country forest.

Brody cycles to Flatbush and finds Bugs' house. Brody, holding a knife, pulls Bugs, singing "All That Glitters Is Not Gold", out of a hole. Brody tells Bugs that he needs a good luck charm and that "he is it". Bugs responds by explaining why rabbits feet are not lucky. Bugs directs Brody to "Swami Rabbitima". Brody decides to chance it on condition he'll come back for Bugs if it doesn't work.

The Swami, Bugs in disguise, asks Brody if he wants his palm read. When he says yes, Bugs paints his right palm the color red. Then, Bugs asks if he wants him to read the bumps on his head. Brody says he has none, so Bugs takes a hammer and makes bumps. Brody, angry at Bugs, starts to chase him, but Bugs starts dealing out playing cards for cartomancy. He tells Brody that he has a meeting coming up with a man wearing a carnation, also Bugs in disguise, who will be his lucky mascot at gambling.

Brody's luck does not change, though. Bugs plays craps, he shoots a seven but it turns up snake-eyes. Next he plays a slot machine and receives a mere three lemons for his trouble. After being kicked out of the gambling establishment by a gorilla bouncer, he heads back to Swami. Bugs asks Brody when he was born, but Brody doesn't remember. Bugs then spins a zodiac wheel then when it lands on the sign of the wolf. He tells Brody that he is lucky with love. However, flirting with a "lady," also Bugs in disguise, only nets him a multiple bonking by a policeman for being a "masher". Brody returns to the Swami and clarifies why he wants his luck to change, "So I can get me hands on some dough! Bugs tells Brody to go to 29 River Street, home of "Grandma's Happy Home Bakery".

Brody arrives at the bakery pointing a gun at the baker, Bugs again, wearing glasses. Brody then moves towards a conveyor belt while telling Bugs, "I know you have a mess of dough. Let me have it," to which Bugs replies, "If you insist!" Because Brody is on the conveyor belt, Bugs drops dough on him, moves the belt towards an oven and Brody comes out baked as a pie.

Bugs, clueless that Brody saw him, unmasks himself. Brody then comes back to life from the pie and Brody realizes that Bugs tricked him from the beginning. Running out of the bakery, Brody retraces his steps to unmask Bugs' previous disguises as the lady, the man, and the fortune teller, leading Brody to believe "Everybody's a rabbit!" Brody then says, "Aw, cmon now Brody, get ahold of yourself. You ain't a rabbit." then into what he thinks is a mirror, but is actually a window, and sees Bugs looking back at him, he thinks he has turned into a rabbit and snaps, while Bugs laughs and pops out. Brody then hops down the street, hysterically shouting "What's up, doc?!" three times.

Seeing a police officer, apparently staring contemplatively at the river from the Brooklyn Bridge, Brody begs him for help. Turning, the officer reveals himself to be Bugs, demanding in a thick Irish accent, "What's all this about rabbits, Doc?" As the last straw, Brody can't take this anymore and leaps into the East River.

Bugs ends his story there, but asks if there is anything else he wants to tell the old man. The man says, "That's enough, son! I'll buy it!" and hands Bugs some money. Bugs then blinks.

The version shown in ABC's The Bugs Bunny and Tweety Show shortened two scenes of Steve Brody being hit on the head:[2] 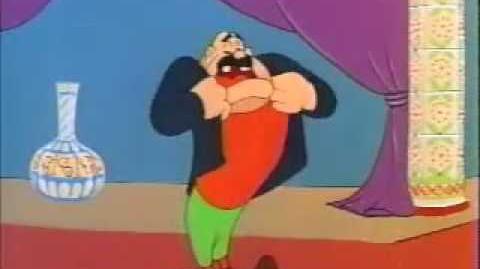 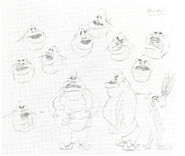