It's Halloween night, and Witch Hazel's brewing some kind of magic potion. As she goes about her business, she pauses at her magic mirror and asks it who's the ugliest one of all. The genie in the mirror replies that she, Witch Hazel, is the ugliest one of all, "By my troth, I will avow: there's none that's uglier than thou". Hazel explains to the audience that she's "deathly afraid" of getting prettier as she gets older.

Meanwhile, Bugs Bunny's out trick-or-treating dressed as a witch, his face hidden by an ugly green mask. He calls on Witch Hazel, who, seeing his costume, mistakes him for an actual witch. "I don't remember seeing her at any of the union meetings." After making a comment about Bugs's appearance, "Isn't she the ugliest little thing", she dashes to her magic mirror and asks it a second time who's the ugliest one of all. The genie in the mirror, also not realizing that Bugs is just a rabbit in a costume, admits that he actually finds Bugs far uglier. "Thou wert the ugliest one, 'tis true. But that creep is uglier far than you."

The jealous witch hatches a plot: she invites the disguised Bugs in for tea and prepares a brew containing various beauty enhancers. Bugs is about to drink the tea when he remembers that he's still wearing his mask, and takes it off. Seeing that her "rival" is actually a rabbit, Witch Hazel dashes off to consult her potion book. Sure enough, the last ingredient for the potion she was brewing earlier is a rabbit's clavicle.

While she's gone, Bugs suspects there's trouble afoot and makes to leave ("You know, my delicate inner sense of danger warns me that there's something faintly unhealthy in the atmosphere of this cottage"), but he's stopped at the door by Witch Hazel brandishing a meat cleaver. Bugs flees, stating, "Uh, pardon me, auntie, but uh, I've got a lot of trick-or-treatin' to catch up on so I'll bid you a civil adieu!", with the cackling witch chasing him throughout her house.

She dashes to her magic broom closet to grab her flying broomstick to keep up with him, but she had accidentally grabbed her magic sweeping broom, which starts sweeping with her on it before she lets go. "Crazy me, that was my sweeping broom," she says. As Bugs hides, knowing "that old bag means to do me serious hurt!" Witch Hazel finally traps Bugs using a carrot on a fishing rod.

Back at her cauldron, Hazel prepares to kill Bugs and use him in her potion. She's about to bring her cleaver down on the trussed-up rabbit, but he plays to her sympathies, gazing back at her with tear-filled doe eyes. Hazel then bursts into tears, claiming his innocent face reminds her of Paul, her pet tarantula. Bugs tries comforting her by bringing her the cup of beauty elixir disguised as tea, which she unknowingly drinks. Witch Hazel instantly changes into a gorgeous redhead with a curvy figure (naturally, Milt Franklyn strikes up "Oh, You Beautiful Doll"), which of course horrifies her, since she was a woman known for relishing her croniness.

Hazel dashes to her magic mirror a third time and meekly asks the genie in the mirror, in a softer, sexier tone of voice to match her beautiful new appearance, if she's still ugly. The genie, upon seeing the witch's new look, immediately falls in love with her and lunges to grab her after giving a very Bob Hope-like "ROWR, ROWR!"

Hazel flees on her actual flying broomstick, with the genie chasing her on his magic carpet, slowly gaining on her as well. Bugs, who's still at Hazel's house, promptly calls the local air raid headquarters to report "a genie with light brown hair chasing a flying sorceress!"

This is the first Warner Bros. short for which June Foray provides the voice of Witch Hazel. Jones had wanted Foray to replicate the voice she had provided for a different Witch Hazel in Disney films when he directed the earlier "Bewitched Bunny". However, Foray initially refused, fearing that it would bother Disney producers and put her in danger of losing future jobs. Jones was forced to substitute Bea Benaderet. Similarly, when Hazel becomes beautiful near the end, she is a caricature of June Foray herself. This idea was carried over to an episode of Duck Dodgers.

Hazel about to bring her cleaver down on Bugs 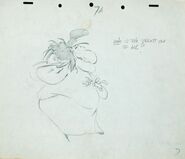 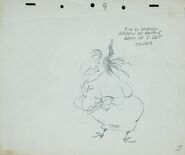