Buddy is an animated cartoon character in the Warner Bros. Looney Tunes series of cartoons.

Buddy has his origins in the chaos that followed the severing of relations between animators Hugh Harman and Rudy Ising from producer Leon Schlesinger. The duo separated in 1934 and worked for Metro-Goldwyn-Mayer starting that year. Without his animators and the star character they had taken with them, Schlesinger was desperate to build his own cartoon studio and maintain his contract with Warner Bros. He lured in several animators from other studios, among them Tom Palmer. Schlesinger told his new employees to create a star character for the studio, and Tom Palmer created Buddy in 1933.

Buddy was little more than a white version of his predecessor, Bosko. Buddy's films weren't much different from Bosko's: music dominates in Buddy's world, and the characters merely exist to add a visual to the soundtrack and to participate in the odd gag. Buddy is usually accompanied in his films by his flapper girlfriend, Cookie, and his dog, Towser. The character would go on to star in 23 cartoons from 1933 to 1935 before he was retired to make way for Beans, who became the third Looney Tunes star before being replaced by Porky Pig. Buddy's voice was performed by animator Jack Carr.

Buddy's shorts were all but forgotten until the era of television began in the 1950s. Program directors, searching for something cheap to fill time, rediscovered the "lost" cartoons from the 1930s. Despite the blandness of his films, Buddy has remained on television, somewhere in the world, almost constantly since then.

Buddy's first new appearance after his original series ended came in the 1993 animated series Animaniacs, where he appeared in the episode "The Warners' 65th Anniversary Special", broadcast on May 27, 1994. In this episode, it was revealed (in the series' fictional history) that the Warner siblings (Yakko, Wakko, and Dot) were created to spice up Buddy's dull cartoons, usually by smashing Buddy on the head with mallets. After Buddy was dropped by the studio in favor of the Warners, Buddy retired to become a nut farmer in Ojai, California, but hated the Warners for ruining his career, and attempted to blow them up at the Anniversary Special to seek revenge. He failed when the Warners thanked Buddy, and he came out of hiding, did a speech at Wakko's suggestion and forgot all about the bomb he did beneath a podium. Jim Cummings provided Buddy's voice here.

Buddy made a cameo in Space Jam on one of the several portraits depicting 1930s era Looney Tunes characters. His portrait is most visible on the left of the door as Daffy Duck is entering the meeting hall after just taking a bath.

A collection of Buddy cels was the focus of one episode of the PBS series History Detectives in 2010.

Buddy in his debut picture, "Buddy's Day Out"

Buddy as he appeared on Animaniacs 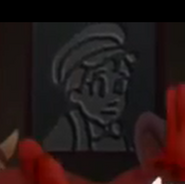 Buddy's cameo in "Space Jam"
Add a photo to this gallery