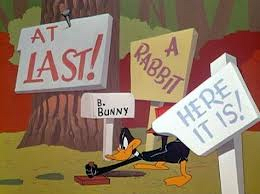 The hole appearance in The Looney Tunes Show in the Peel of Fortune episode, when Bugs got fed up with Daffy, who took over his home, and decided to move back to his little hole in the ground. (After Yosemite Sam suggested he should) He later moved out. After it got flooded from rain and Daffy allowed him to move back to his house.

At the opening of Wabbit there is a hole, but in the episode "Wabbit's Best Friend" another hole is situated in a Dog Park. Another episode shows that Bugs has a home.