Bugs' White Water Rapids is a flume ride located in the Spassburg section at Six Flags Fiesta Texas in San Antonio, Texas, since 1998.[1][2][3]

Bugs' White Water Rapids has two lift hills and two drops.[1][3] The ride is the longest operating water ride in the park each season, from it operating from Opening Day to Fright Fest and to Holiday in the Park. During Holiday in the Park, the ride closed for it being transformed to Santa's Castle until Christmas, then it opens back up until the end of the season.

The ride was manufactured by Hopkins Rides and constructed by Martin & Vleminckx.[4]

Once riders get on Bugs' White Water Rapids, the flume takes a right coming out of the station. It then began travels towards the first lift hill . After the small first drop, then the flume make an almost complete circle to the right and then takes you up to the second tallest part of the ride. Once at the second highest part of the ride you dip down and curve through turns back and forth along KIDZOPOLIS and over the ride below it. Then the flume will take you to the highest part of the ride at Template:Convert. Once at top you go straight down to the water with a big splash. After the big drop the boat will travel through more turns until it reaches back to the station, so then riders can depart.

Bugs' White Water Rapids is themed to the famous Looney Tunes character Bugs Bunny and also Yosemite Sam. While riding the flume it tales the story of the Academy Award winner, 1958 Looney Tunes show Knighty Knight Bugs by the ride Medieval scenery.[1] The station of the ride and the queue is located inside the "Black Knight's Castle" Where guest experience the antics of Bugs Bunny, the court jester, as he is commissioned to use his wits and reclaim the Singing Sword.[3] 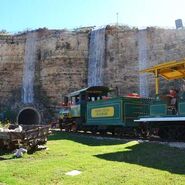 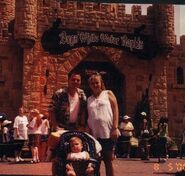 Retrieved from "https://looneytunes.fandom.com/wiki/Bugs%27_White_Water_Rapids?oldid=115624"
Community content is available under CC-BY-SA unless otherwise noted.