Bugs Bunny's Lunar Tunes is a direct-to-video special reusing footage from six earlier cartoons. The linking footage has Bugs being kidnapped and brought to space by Marvin the Martian and K-9. Bugs must defend Earth on courtroom charges that Earthlings are casting aliens in a negative light, and if Bugs loses, Marvin will effect an apocalyptic punishment on Earth. Marvin shows clips from "Duck Dodgers in the 24½th Century", "His Hare Raising Tale", "Martian Through Georgia", and "Rocket-bye Baby" as evidence. Bugs, in defense, uses clips from "The Hasty Hare" and "Hare-Way to the Stars". 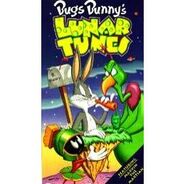